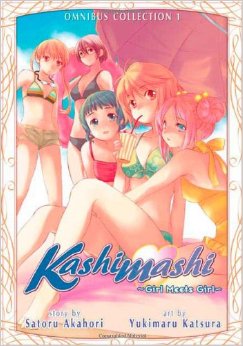 Kashimashi is a yuri manga about Hazumu, a boy who is turned into a girl by aliens. Lesbian hijinks ensue? I’m torn on how to talk about this book, because of course the whole premise is cissexist. The idea that changing your body automatically would change your gender is cissexist, and in fact despite being all about Hazumu adjusting to another gender, there is no acknowledgement in the story that trans people exist. At the same time, however, it was interesting to see how gender is explained and expressed in the narrative. We don’t really get to see into Hazumu’s thoughts of swapping bodies and being expected to live up to a different gender role. When pressed, she* just basically shrugs and says “There’s nothing anyone can do about it.” She seems to roll with it pretty easily, however. She is confused by the rigid expectations of how women should behave, but other than that she doesn’t seem to have much of a problem with it. (Except that it comes with the expectation that she will be attracted to men.) And the first time we see Hazumu pre-transformation, he is told he seems “really feminine”. Hazumu rebuffs the girl’s subsequent apology by smiling awkwardly and saying “It’s okay. I get that a lot. Everybody says I look like a girl.” [mild spoilers, highlight to read] Later, we find out that as a child he wanted to be a bride. [end spoilers] So I wonder if Hazumu ever was 100% comfortable with his gender pre-transformation. [mild spoilers] We even get hints that Hazumu was looking to transform and escape his reality in some way–that the transformation may not have been nonconsensual. [end spoilers]

I can completely understand people not wanting to read Kashimashi because of the cissexism, or not enjoying it because of that. But I admit that I still found it a really fun read. The bulk of the story, apart from everyone trying to teach Hazumu how to be “appropriately” female, is a love triangle between Hazumu, the lesbian he was rejected by pre-transformation who is now interested, and Hazumu’s friend who was interested in him pre-transformation and is now completely confused by her feelings. It’s silly and dramatic even without the alien aspect. (The aliens stick around, observing Hazumu and putting her in awkward situations.)

I have read very few manga stories, so I’m not sure how this compares to the rest of the yuri genre, but I really enjoyed it. It induced quite a bit of eye-rolling around cissexism and heterosexism (“Girls… liking girls???”), but I liked the characters and their unique relationships (oh, except the creepy incestuous dad and… well, most of the male characters), and it was mostly just a fun ride. I would definitely put some caveats in place with a recommendation, but it’s worth picking up if it piques your interest. Personally, I’ll be reading the next omnibus and hoping for more of an insight into Hazumu’s personal gender identity.