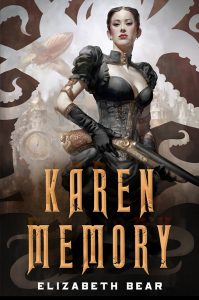 If “lesbian steampunk Western” doesn’t already pique your interest, I’m not sure what else to say, but I’ll give it a try! Karen is a “seamstress” (a sex worker at bordello) in Rapid City, in the Pacific Northwest. She’s satisfied enough with her life–the girls at Hôtel Mon Cherie are a tight-knit group, and she’s saving up money to train horses–when, well, I’ll let the blurb do the talking: “Trouble erupts one night when a badly injured girl arrives at their door, begging sanctuary, followed by the man who holds her indenture, and who has a machine that can take over anyone’s mind and control their actions. And as if that wasn’t bad enough, the next night brings a body dumped in their rubbish heap-a streetwalker who has been brutally murdered.”

Although there is a murder mystery aspect to this, Karen Memory is much more of a fast-paced adventure, as Karen and her friends get tossed into increasingly more dangerous and daring situations. The steampunk element starts off pretty minor–it took me a long time to realize that the “sewing machine” was some sort of mechanical exoskeleton and not just a typical sewing machine–but by the end of the book, there are all sorts of wild steampunk elements that I don’t want to spoil for you.

My favourite part was the relationship between Karen and Priya. Priya is a recent Indian migrant, who was trapped in a human trafficking situation. She has escaped to the Hôtel Mon Cherie, and Karen immediately falls for her. This could fall under insta-love, I suppose, but I don’t really see the problem in being intensely attracted to someone at first and then building a relationship together, which is what happens here.

There is a diversity of side characters, including trans characters and black, indigenous, and Asian characters. They are, for the most part, well-rounded, but they are often described in ways typical of the time period. [Highlight for the particular language/slurs included:] The trans character is described as  having a “pecker under her dress,” but that it was “God’s cruel joke”, and she’s “as much a girl as any of them.” The indigenous character is described as a “red Indian” many time. The N word is included, though not said by the protagonist. There are more, similar descriptions used, but this gives you an idea. I’m honestly not quite sure what to make of that, and I’d like to read some reviews by trans, black, and indigenous reviewers to see what they think of it. I can see how it would be a response to the typical Western, by having a diverse cast, but still staying true to the time period, but I’m not sure you need to include slurs or racist descriptions to do that.

I listened to this as an audiobook, and I thought the narrator did a fantastic job. I really got a sense of Karen’s voice. On the other hand, I have trouble following action-packed plots at the best of times, and by listening to the audiobook, I definitely dropped the thread a few times. I think I enjoyed it more by listening to it, but I probably would have understood what was happening better if I had read it. I’m sure this would be a fantastic read for fans of Westerns or steampunk books, especially if you wish they were a little less straight and white, but it wasn’t the perfect genre match for me. I prefer stories that concentrate on characters, and although I got a sense of Karen’s voice, I didn’t get to know her as a character as well as I would like.

Despite those notes, I did like it enough to immediately pick up the other book in the series, and it looks like I’m going to like Stone Mad even more: Victorian spiritualists are my jam.