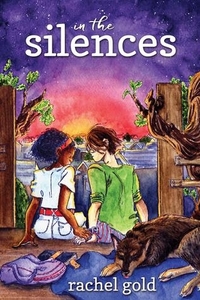 While Rachel Gold usually writes about gender and sexuality, In the Silences expands this by also tackling race. Although it does have a non-binary, genderfluid main character who is discovering and accepting their gender identity, it is just as much about Kaz learning about race, racism, and whiteness. While I originally was a bit worried about a book so much about race being written by a white author, as the book went on, I realized that it is much more about whiteness. Kaz’s best friend and love interest, Aisha, is black (and bisexual), and by listening to Aisha and seeking out resources, Kaz begins to realize the impact that race has in their small, mostly-white community.

Kaz and Aisha are both comic book fans, and Kaz relates to both their gender and the concept of racism by relating it to comics. The voice that whispers racist thoughts in white people’s minds is Apocalypse, a comic book villain who has brainwashed people. Kaz attempts to understand how to fight against this force, and how to help their loved ones see that it exists. Kaz lives with their mother, brother, and grandparents. Their grandmother is progressive and accepting, helping Kaz to process this information and taking their coming out in stride. Their mother and brother are a different story, though, and Kaz struggles to figure out how to get through to them.

In the Silences really explores the day-to-day of microaggressions and unrelenting racism, particularly anti-black racism. (Of course, as a white person reading a book written by a white author, I can’t speak to the authenticity of these depictions.) Kaz is the point of view character, so we see Aisha’s experiences through their eyes. Kaz is slowly awakened to the daily, sometimes subtle and sometimes blatant discrimination that their best friend faces. Aisha wants to be a doctor, and at every turn she is underestimated and her intelligence is doubted. I especially liked the attention the story pays to stereotype threat, and how often Aisha is placed in impossible situations, where she must devote so much mental energy to navigating others’ racist perceptions of her, leaving her little room to do anything else.

At the same time as they are learning about race, Kaz is exploring their gender, and beginning to accept being non-binary and what that means. Aisha and Kaz are able to find commonality in their identities being erased, but they also recognize their very different experiences and work to become allies for each other. They look out for each other, and they put in the work of trying to understand each other. In one scene, Aisha has printed out pictures of black female doctors and other role models to help her feel less alone (and combat stereotype threat). At the same time, she offer Kaz examples that she has found of non-binary people and communities through history–combating Kaz’s isolation.

I feel like what Not My Idea: A Book About Whiteness does for small children, In the Silences does for teens. I still haven’t found a lot of books like these two, which recognize that it is white people’s responsibility to learn about racism and fight to change it, and especially to educate each other. This is much-needed, and I hope that it finds its way into the hands of the people who need it.