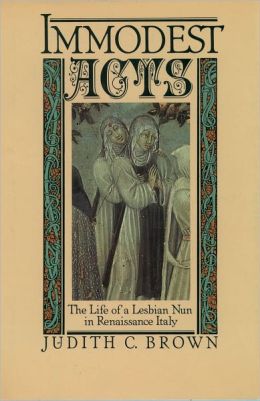 Between being an English major (recently graduated!) and a book blogger, it has been years now since I’ve been able to just pick a book to read because I was in the mood for it. I always had a stack of school books and review books I had to get through first. Finally, I have finished school and caught up on my review copies! Which means that I have been able to select completely random things to read next. Anna M calls it “Reading Roulette”! This one has selected by numbering my unread shelves and having my roommate randomly choose a number, and then doing the same with some of the books on that shelf. I ended up with Immodest Acts, which is probably a book I wouldn’t have chosen to be top of my reading pile, but I was delighted to get a chance to read, after it’s been languishing on my shelves for years!

Immodest Acts is nowhere near as salacious as the title would have you believe. Brown is clearly a historian, and this book is packed with footnotes (well, endnotes) and historical context. This means that it’s not exactly a fast read, but that’s not because the writing style is difficult to read; it’s just dense with facts. (Especially if you’re the kind of reader I am, where you have to check every footnote.) It follows Sister Benedetta Carlini from childhood to death, who was at times considered a mystic and Jesus’ wife, and other times a fraud and worse besides.

The “lesbian” aspect doesn’t come into the story until the last twenty pages or so, though it’s what the introduction is all about. I put lesbian in quotation marks because not only is it anachronistic, of course, but it’s particularly unsuitable for Carlini. She has (sexual? romantic?) relationships with men as well, and [spoiler?] claims to be a male angel when she is with a woman, and the other woman may not have given consent [end spoiler] Her religious fervor for Jesus is semi-sexual/romantic  (and often masochistic). At the same time, it is rare to have such explicit documentation of female/female sexuality in the seventeenth century, so I can see how it is relevant to lesbian history.

More than lesbian nun escapades, Immodest Acts provides an interesting look into being a woman in the seventeenth century, especially as a nun. And even besides the sexual accusations, the history of Carlini is compelling, from her claims to visions to her denunciations. This book discusses her life both religiously, leaving room for her having genuinely experiences miraculous things, as well as from a psychological perspective, suggesting that she may have disassociated from her male angel identity in order to deal with her sexuality–though the psychological aspect comes up more in the final couple dozen pages. If you’re just reading for the lesbian aspect, then most of this book will drag for you. To be fair, though, the lesbian aspect is more explicitly described in the documentation than I was expecting! I thought it would be all euphemism and sly winks. If the life of a failed seventeenth century mystic seems interesting to you, though, then I recommend that you pick this one up.