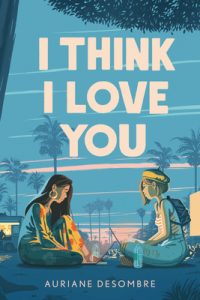 I Think I Love You is a bisexual YA F/F romcom told in alternating perspectives between Emma and Sophia. Emma is a romantic. She loves love, and she’s happy to play matchmaker with her friends. Sophia is the anti-romantic: after her parents split up, she now doesn’t believe in (romantic) love. When Emma tries to make a bisexual romcom to enter in a film contest, Sophia refuses, hoping to direct something artsy and tragic. Their bickering splits the friend group in half–but this is a romcom, so it doesn’t end there, especially when her friends come up with a scheme to try to reunite the groups.

This is a classic enemies-to-lovers/hate-to-love romance story, chockful of tropes. Emma and Sophia get in heated arguments, hurling out insults that cut to the quick–but even when they’re fuming, they’re still absentmindedly noting how the other’s face lights up when she laughs. At first, I was worried that Sophia was too cruel in their arguments, but as the book goes on, they both give as good as they get.

Both the strengths and weaknesses of this story are in its relationship to romcoms: if that’s a format you love, you’ll probably enjoy this one. If you’re allergic to romance tropes, though, I’d advise giving it a pass. As much as the relationship between Sophia and Emma is the focus of the story, it’s not what I appreciated the most.

I read this for Book Riot’s All the Books podcast, where Liberty and a rotating crew of cohosts discuss the books out that day. I happened to pick two bisexual contemporary YA novels, both out March 2nd, that both discussed bisexuality as an identity category in a way that resonated with me. (The other is Follow Your Arrow by Jessica Verdi, which I will review soon!) In this one, Emma worries about feeling like she shouldn’t make a big deal of her bisexuality–but it is a big deal to her, and it’s a significant part of her identity. She worries about coming out to her parents. Partly because they have made some offhand ignorant comments in the past, but also because she doesn’t know how to communicate how important it is to her. I think that bisexuality is often downplayed as not significant: when bi women are in relationships with another woman, they’re still seen as basically a lesbian, and when they’re with a man, they’re seen as essentially straight. It’s not often respected as a distinct identity, and one that can be just as meaningful to that person as being gay is. (Which is to say that everyone has their own relationship to labels.)

I also enjoyed the relationship between Emma and her cousin, Kate. Kate is a fatshionista who is unfailingly kind, and Emma absolutely idolizes her. That is likely tied to Emma’s low self-esteem, but I liked seeing this fiercely protective relationship between the two of them: I don’t read a lot of stories with friendships or family relationships that are that intense unless they’re siblings.

I’ll admit, sometimes I Think I Love You verged on the melodramatic for me, but it delivers exactly what it promises. It’s a hate-to-love story with bickering, banter, and heartfelt moments. I was worried that one aspect of the plot was going in a wildly unrealistic direction, but I was happy to proven wrong. If you want a romcom read with a bit of cheesiness, but also a great discussion of coming out as bi, give this one a try!