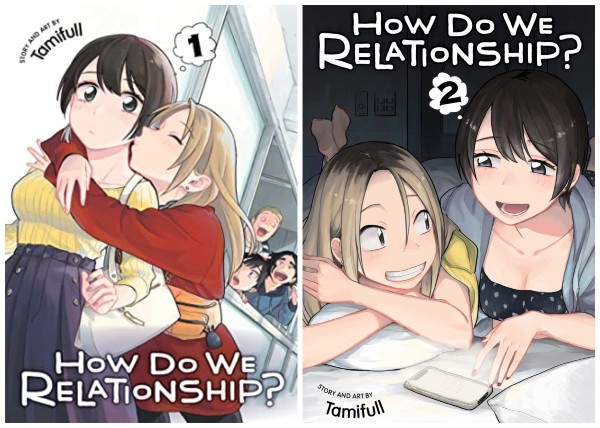 Although I’m far from an expert, I’ve really been enjoying yuri manga lately, especially lesbian manga. (Check out my post: Lesbian Manga and Yuri Manga: What’s the Difference and Where Should You Start?) Although I enjoyed books like Girl Friends, I’d rather read about adult characters–hopefully ones that use words like lesbian, bisexual, or queer to describe themselves.

This series is about two women who meet in college and decide, “What are the chances I’m going to
run into another out queer woman here? Why don’t we just date each other?” They don’t have much in common–in fact, they hardly know each other at this point, but decide to see what happens. They have very different personalities, which keeps their interactions interesting, and it’s hard to tell at first if they will be able to have a functioning relationship.

They’re also both working through a lot of self-esteem issues and carry some baggage with them. Miwa is very shy and sheltered, and she’s never been in a relationship. Miwa was painfully outed when she was younger. These influences mean they sometimes disagree about being out as a couple. Because they have this contrived beginning to their relationship, they take nothing for granted, which I really liked. They have frank discussions about their relationship–and particularly about sex. I’m used to yuri manga that has a lot of blushing and hand-holding and meaningful glances. This is one of the
few that I’ve read that has sex scenes, and they don’t feel like fan service or the male gaze to me. Whether it’s in sex or conversations, I appreciated that they’re often realistically awkward. This is not a romanticized relationship: they are both complex, flawed people, but they are trying to improve.

This isn’t flawless: volume 2 contains a possibly transmisogynistic joke, unless I’m misinterpreting it–though it also might have a trans character. There is a side character who gets a subplot who discussed not wanting to be in a relationship because they would “have to be a woman.” I look forward to seeing how that arc continues in volume 3. Saeko can also be pushy with Miwa–and she definitely needs to stop groping her in public.

Overall, though, if you like yuri manga, I highly recommend this series! I’m excited to see queer manga become more common: series that deal with real-life LGBTQ issues and not just subtext or schoolgirl stories.