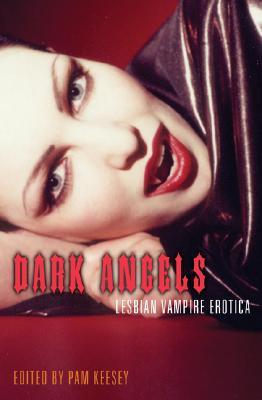 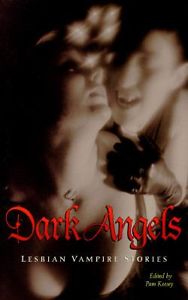 This was another (in addition to The Haunting of Hill House) book I intended to read in October, but didn’t come in to the library for me until November, so I’m extending my Halloween reads! When I went to pick it up, I was surprised to see that it was billed as erotica: I didn’t think I had requested any erotica. It wasn’t until I got home that I realized that it’s because originally the book’s tagline was lesbian vampire stories, and was changed to “erotica” in the new edition. Knowing that made the collection make more sense. Although there is a lot of sex in Dark Angels, I wouldn’t exactly call it erotica. The introduction especially takes the subject matter pretty seriously, discussing themes of vampirism and goddesses, dark angels, Lilith, etc. Although some of the stories pretty quickly just get into sex scenes with fangs, others are without sex–including “Bloody Countess”, which is just a long description of various tortures Erzsebet (Elizabeth)Bathory performed on girls.

I have read and own Pam Keesey’s previous lesbian vampire collection, Daughters of Darkness, and I really enjoyed that one. The introduction to Dark Angels explains that while its predecessor was lesbian stories with vampire themes, this collection is vampire stories with lesbian themes. Perhaps because of this, I didn’t enjoy Dark Angels as much as the first collection. There are some stories that I really liked, especially the writing of “Presence” and “Cinnamon Roses”, and the intrigue of “Blood Wedding”, and I did enjoy the explicitly-queer-for-Victorian-times story (“The Countess Visonti”). Overall, though, the erotica stories weren’t particularly titillating to me, and the more literary stories weren’t as memorable as I’d like. (Unlike Daughters of Darkness‘s lesbian-vampire-in-space story!)

Perhaps predictably–we all know the lesbian vampires joke–there is also a lot of menstruation in this collection. Which makes sense, and was something I’d appreciate being addressed in one of the stories, or a few, but the frequent returns to the subject were a little much for me. I was also bothered by the “Tale of Christina” positing lesbian sex as fundamentally incomplete/unfulfilling. Also, “The Bloody Countess” is the longest story in the collection and is second to last. The list of (supposedly real-life) tortures that ran on for 16 pages kind of turned my stomach, and seemed a little weird in the context of “erotica” stories. I also felt like the introduction dragged on for me, especially considering that it didn’t really seem to match the tone of the stories included. As you can probably tell, I wouldn’t recommend this collection. Try Daughters of Darkness instead.