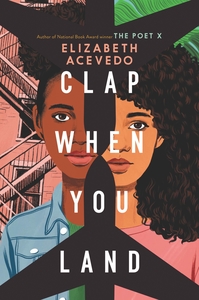 Papi was a man split in two,
playing a game against himself.

But the problem with that
is that in order to win, you also always lose.

Yahaira and Camino are half-sisters, but they don’t know it. Yahaira lives in New York City with her mother and father, though he goes to the Dominican Republic every summer. She has recently discovered the reason he makes this journey every year and is furious, refusing to speak to him (or let him know what’s wrong). Camino lives in the Dominican Republic and looks forward to her father’s yearly visits, especially since her mother passed away. They are both heartbroken when their father’s plane crashes and he passes away, unaware of their shared grief.

I was immediately interested in the premise of Clap When You Land. I have a big, messy family–we even discovered a long-lost aunt at one point–so I wanted to be able to read about these two characters discovering that they’re family, and figuring out how to assimilate that into their understanding of themselves.

This is my first Acevado book, and I’ve heard amazing things about them. I knew that some of her books are written in verse, but I wasn’t sure if this one was: I ended up listening to it as an audiobook, and I still wasn’t sure when the novel began. I realized that it is written in verse, but it works in spoken format, and sounds natural most of the time. There are also two narrators for the point of view characters, which I appreciated.

I loved the characters: they felt well-rounded and real, and I felt for them. Yahaira is trying to understand her life now that she knows her father has been lying to her. She had turned away from him and the values that he instilled, freezing him out before he got on the plane. She has stopped playing chess, which used to be a big part of their shared lives. She is lost afterwards, struggling to deal with the messy aftermath of death: her mother making funeral arrangements (in the Dominican Republic? In New York?), distant family members showing up at the door when the settlement money is brought up, and her teachers and classmates not knowing how to speak to her. She also has a girlfriend, who lives next door, and they have a very sweet relationship. It’s nice to see an f/f relationship that is already established and comfortable. It has flaws, but is fundamentally a source of comfort and happiness for both of them.

Camino’s everyday life is very different. She wants to be a doctor, and already has experience caring for the sick and dying as an apprentice. She is used to friends her age having children and possibly dying from it, because there isn’t adequate medical supplies and treatment. She goes to a private school paid for by her father, in the hopes of eventually going to the U.S. for university. After he passes, not only is she left orphaned, but she is incredibly vulnerable. Her school asks for tuition she doesn’t have, and she is being recruited into sex work by a man who was once paid by her father to leave her alone. Her options are running out, and she is willing to take a desperate risk to save herself.

Even the side characters are complex and interesting, even if we don’t see a lot of them. Yahaira’s mother and Camino’s aunt are mostly background characters, but we can see how their grief affects them, and the strength that it takes to continue onward and to take care of them as much as they can. This is primarily a story about grief, so it isn’t fast-moving. Instead, we stay with Yahaira and Camino as they try to process, and we sit with that discomfort.

From the premise, I knew that eventually the two half-sisters would have to meet, or at least become aware of each other, and that was the moment I was waiting for. Unfortunately, it came a lot later in than I was hoping for. They aren’t even aware of the other’s existence until the latter half of the book. I was excited to get to that point, but it felt a little bit rushed. I wanted to see the two of them establish a relationship and then see it change and mature. I wanted to see how their lives changed with each other in them.

This is a thoughtful, poignant story about grief, and I can see why Acevado is celebrated as a writer. I didn’t get the resolution I was hoping for from Yahaira and Camino’s relationship, but that’s a personal reaction, and it’s still one I would recommend.