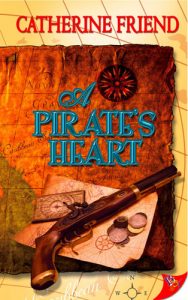 In case the name of this blog didn’t tip you off, I have a soft spot for libraries and librarians. I may not have become a real librarian myself (though I play one online), but I still dream of a life where I did. So whenever I see a book starring a lesbrarian, I have to pick it up. Pair that with a lesbian pirate parallel plot as well as a modern search for hidden treasure, and I couldn’t help but be hooked by A Pirate’s Heart.

There are two stories going on here: the story of Thomasina Farris, the pirate looking for her next big treasure and dreaming of getting out of the pirate business (meanwhile, she’s unexpectedly falling in love). In the present day, Emma the librarian is trying to find the person responsible for destroying library books across the country by tearing out maps of the Caribbean–where Tommy Farris’s treasure may still be hidden. She has to team up with private eye Randi to catch the criminal, but they don’t see eye to eye. (I think you can see where this is going.)

This was just as fun as the premise would suggest. A search for hidden treasure! And I love that Emma’s librarian research skills were put to the test. By the end of the book, I wasn’t sure if I was completely sold on the present-day romance, but I did like that there was some complexity to it. At first, I wasn’t sure if there were consent issues in the pirate romance story line, but I think it worked out okay?

My major complaint was the biphobia. Emma repeatedly mentions that her two previous girlfriends left her for men and that she “turned them straight”, with no mention that bisexuality exists. Because it was mentioned multiple times, I thought it would at least be relevant in some way–maybe she would end up with a bisexual woman and have to grapple with her biphobia? But no, it’s just tossed in their for no reason.

Other than that, though, I really enjoyed it. The pirate storyline is a fun adventure, including villainous rival pirates, a mutinous crew, and a mysterious (magic?) island. The present day storyline is a puzzle and a scavenger hunt: where is Tommy’s treasure, if it exists? How did she die? Who’s stealing the maps and why? Where is her map and what does it lead to? Randi and Emma butt heads, but their opposing skill sets are necessary to solving the puzzle (and evening out the extremes in their personalities).

If you’re in the mood for a story about the search for pirate treasure with a generous helping of romance, I definitely recommend picking this one up. It is focused more on the present day treasure hunt, but you also get a good look at what Thomasina’s life was like as a pirate captain. If you’re an audiobook fan, I enjoyed the performance of this one as well!