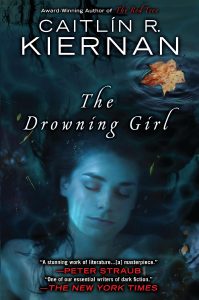 This book is a very complex one. I put off doing the review for a while, letting myself absorb the content fully. It’s only three hundred something pages, but the story within is heavy. It is about some very triggering content, including a suicide attempt, many references to people who have committed suicide, and descriptions of violence against women. I will be talking a little bit about this kind of stuff in my review, so consider yourself warned.

The story is about two different stories that might or might not have happened, according to the unreliable narrator. A lot of the story focuses on duality: the character is named India Morgan Phelps, but people also call her Imp, her mother and grandmother both committed suicide in two very different ways, the inciting event occurs either in July or August, and the woman she meets might be a siren or a werewolf.

Confused? Yeah, so is the protagonist.

Another part is her unique take on life. She’s a lesbian, and at the time the story takes place she lives with her girlfriend, who is trans. This is treated very respectfully, which makes sense considering the author is a trans lesbian herself. She is fascinated with art and writing, which come into play as symbols of her understanding of what happened. Imp is trying to tell us the honest story of the past six months or so, and tell us in her unique voice.

It is confusing, as I had said earlier, which made it hard to get into. Also, with all the art and literature talk, it gets a little hard to understand. Some of the art is actually real, and others seem to be made up for the story, which was another thing I didn’t really get. But it doesn’t really matter–being confused is part of the experience. While it is something important, it can take some time to get used to. It was worth it to get to the end in my view.

This story, aside from its drawbacks, is incredible. It is one of the most unique stories I’ve read. The author is a mentally ill trans woman, and so this definitely feels like it comes from the heart. You could place it in horror, with the sinister feeling developed throughout the novel, or fantasy with the creatures of legends and loose grip on reality, or even label it as a memoir considering how it is written, but none of those are quite right. It’s a deeply personal novel, one that I appreciated profoundly as a mentally ill lesbian myself. I would suggest it to anyone who likes complex and dark novels!