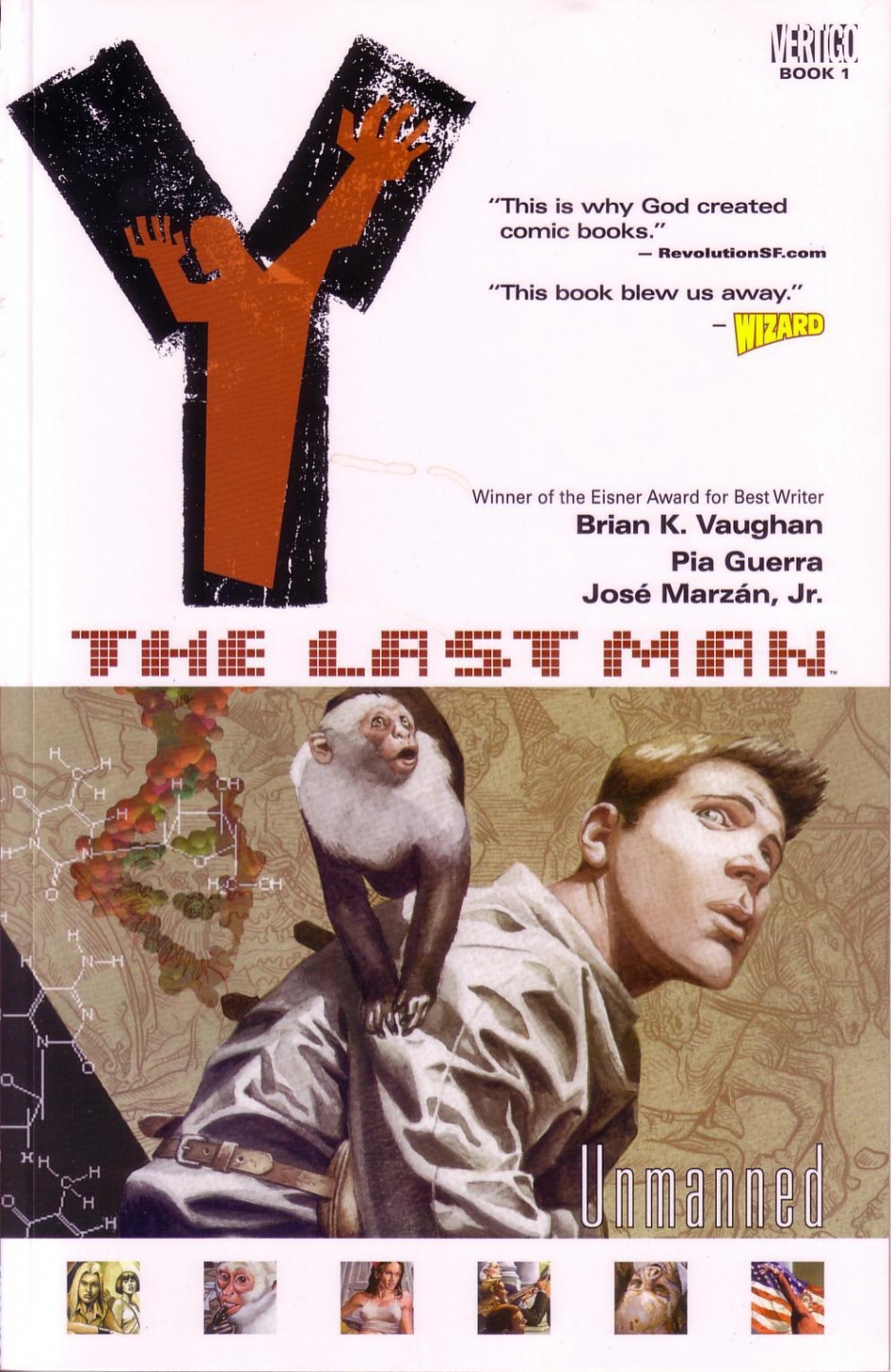 You’d probably expect there to be never-ending lesbian action in a science-fiction series that imagines a post-apocalyptic world where all mammals with XY chromosomes have suddenly and en masse dropped dead.  In the Y: The Last Man graphic novels, though, the women have a lot of other important things to do—you, know, like making sure humanity doesn’t die out entirely and all.  Also, they need to figure out why one single cisgender man and his pet male monkey have somehow survived this mysterious plague.  Ironically, the “last man on earth” is kind of a loser: an unemployed English major named Yorick (after the character in Shakespeare’s Hamlet) who’s an amateur escape artist.  His adventurous anthropologist girlfriend Beth is half way around the world in Australia while he’s back in the US when all the men die; for most of the series Yorick is obsessed with trying to find her, despite the fact that his life may hold the key for the survival of the human species and he needs to be doing other things.

Along for the journey with Yorick are two really amazing, dynamic, flawed characters.  One is Dr. Allison Mann (or “doc” to her two traveling companions), a geneticist and scientific genius who’s cynical and sarcastic and hilarious; she was definitely my favourite character.  She also happens to be a lesbian—as in, she actually identified as queer before the plague, after which women don’t really have any other options.  I appreciated a few things about how the books dealt with Allison’s sexuality: one) the fact that she’s a lesbian is definitely not the main focus of her identity; two) she’s Asian-American and I’m always pleased to see complex queer characters of colour in fiction; three) her gender probably falls under what I’d call chapstick femme and in comparison to other characters’ more masculine genders, I thought it was an unconventional and interesting choice to establish her as the self-assured lesbian.  Later on in the series, Allison gets a really awesome girlfriend who’s an Australian pirate/sailor with an eyepatch.  For serious.

The choice to make Allison gay is especially remarkable in comparison to the other member of the series’s trio, a government secret service agent whose real name is never revealed.  Known as “agent 355” or three-fifty to Yorick and Allison, she’s a no-nonsense, super tough butch African-American woman who pretty much kicks ass (literally) the entire series.  It was quite the twist, actually, to find out that Allison is a lesbian and 355 isn’t (happily, this doesn’t stop 355 from a bit of Sapphic dabbling though).  At one point she utters this brilliant line: “I am so goddamn tired of killing people.”  The evolution of her character is quite fascinating, as you watch her slowly form emotional attachments to Yorick and the doc, whom it’s her duty to protect as they travel the world.  Both women, actually, begin the journey relatively emotionally closed-off, for various reasons in their past that the comics explore through flashbacks.

If you enjoy stories that feature lots of action and tough, hot women kicking ass and saying ‘fuck’ a lot, this is definitely a graphic series for you.  Actually, if you like that kind of thing you’ve likely already read this (and own a copy of the movie Tank Girl like me).  But I think Y: The Last Man would also appeal to readers who wouldn’t say action and violence are their thing, or folks who wouldn’t call themselves comics fans.  Although its gender politics aren’t perfect—or rather, I wouldn’t say I always found it to be in line with my brand of feminism—Y: The Last Man opens up a really interesting dialogue about gender.  Namely, if you think a world made up of women is going to peaceful and loving and that women can’t be power-hungry or greedy or violent or cruel or militaristic, this book is a strong argument to the contrary.  In other words, patriarchal values don’t die with the men.

Some of the phenomena of the post-plague world are really fascinating.  For example, there’s an extremist so-called feminist cult who call themselves the Amazons who think mother earth exterminated men because she realized creating them in the first place was a mistake.  They basically go around burning down sperm banks and killing women who don’t agree with them/make the mistake of mourning men they loved.  Other women discover a new brand of sex work, cross-dressing as men and sleeping with (formerly) heterosexual women.  The what-if world of Y: The Last Man raises some intriguing questions about the nature of sexual orientation: are straight women still straight with no men around?  Are they some kind of situational lesbians now?  After a period of time of being necessarily queer, would these women be as heterosexual as they had been in the past if men somehow came back?  There’s a surprisingly romantic pairing at the end of the series (between two previously hetero women) that especially brought up these kinds of questions for me.

One thing I would have liked to have seen addressed more is trans issues.  The fact that trans men are still around (because they don’t have XY chromosomes) is mentioned occasionally and there’s one particularly bad-ass character who’s on a revenge mission because the Amazons, thinking he somehow managed to escape the plague, killed her boyfriend who was trans.  Regrettably, though, when this character is first introduced she refers to her boyfriend using feminine pronouns.  Very basic research by the authors would have told them no partner of a trans man would ever use ‘she’ to refer to him; thankfully, when this character is re-introduced much later, this pronoun issue is fixed (I’m guessing because a gazillion people told them using ‘she’ was totally not cool).  Like I said, this series is definitely not perfect—for reasons like the trans pronoun issue—but overall I recommend it as a thought-provoking science-fiction exploration of gender and sexuality that just happens to feature a ton of bad-ass gorgeous women.

One Reply to “Casey reviews Y: The Last Man”