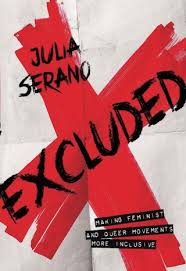 I was pretty eager when I picked up writer, performer, and activist Julia Serano’s latest book, Excluded: Making Queer and Feminist Movements More Inclusive. I had read her first book, Whipping Girl: A Transsexual Woman on Sexism and the Scapegoating of Femininity back when it came out, and thought it was totally mind-blowing and so overdue and just plain old awesome in every way.  It taught me a lot about femininity, gender, sexuality, feminism, and transmisogyny (actually, I’m pretty sure it taught me the term transmisogyny).  Whipping Girl is one of the best feminist books I’ve ever read, and I really think that it should be read by, like, everybody.  If you haven’t read it yet, go do that right now!

So, given my high expectations, it kind of makes sense that I could only be disappointed by Excluded.  Whereas in Whipping Girl Serano is tackling queer and feminist movements head-on, specifically for their transmisogny and devaluation of femininity, Excluded is trying to do something broader.  I say trying, because I don’t think this book really succeeds in doing what it wants to.  Serano writes that she wants to stop focusing on specific groups that queer and feminist movements have excluded and continue to exclude but rather to look at the idea of exclusion more generally.  This is interesting in theory but not really in practice.

To be honest, I just think Serano is at her best when she’s speaking to her specific circumstances, not when she’s trying to formulate over-arching theories.  Her experiences both as a biologist and as a feminine trans woman offer perspectives on gender, femininity, and bisexuality that are often overlooked, both in queer feminist and mainstream circles.  She writes really well about the exclusion in queer and/or feminist spaces of trans women, bisexuals, and femmes—all her own identities.  This is what she does in the first part of Excluded, which I thoroughly enjoyed and found fresh and thought-provoking.

She writes convincingly and admirably, for example, about the ways in which anti-feminine sentiments are used to undermine and delegitimize trans women, coming out as bisexual after identifying as lesbian, and transmisogny in cis queer women’s communities.  She passionately describes how “cis dykes’ unwillingness to consider trans women as legitimate partners translates directly into a lack of community for queer-identified trans women.”  She debunks the idea that the label bisexual is inherently gender binary-enforcing, pointing out that gay and lesbian identities are hardly ever accused of this, despite the fact that they also rely on a woman /man binary to make sense.  Hmm, it appears that it’s bisexuals, trans people, and femmes who are constantly accused of reinforcing the gender binary, whereas their privileged counterparts aren’t.  Serano also brilliantly points out that

The sad truth is that we always seem to create feminist and queer movements designed to challenge sexism on the one hand, while simultaneously policing gender and sexuality … on the other… radical movements practise exclusion and police their own boundaries just as fiercely as conservative ones (as can be seen in many self-identified radicals’ pronouncements that certain individuals or identities are not feminist or queer enough.)

She argues that this exclusion is a “systemic problem that stems from the way we conceptualize sex, gender, and sexuality, and the way we frame sexism and marginalization more generally.”  In other words, we view things hierarchically, no matter where we stand.  I can totally get behind this, and appreciate that she is critiquing both radical/anti-assimilationist and liberal/assimilationist movements.

It’s in the second half of the book, however, where Serano begins to lose me a bit.  For one thing, I simply don’t agree that we need to “stop pretending there really is a gender system,” because exceptions such as the way some genderqueer folks look down on men and women, or how straight women aren’t welcome in certain radical feminist movements don’t fit in our hegemonic understanding of patriarchy and heterosexism.  I, do think, though, that these situations can be explained by the gender system.  To me, these exceptions are reactions to institutionalized oppression (i.e. the hetero –patriarchal gender system) but not examples of oppression itself.  To be fair to Serano, I don’t agree with her because my definition of sexism isn’t the same.  I certainly think these exceptions are wrong and unfair, but I don’t think that makes them oppression; this is because while these situations show prejudice, that prejudice doesn’t coincide with societal/economic/cultural power.

Frankly, those kinds of exceptions just aren’t that high on my list of priorities, despite the fact that in one of these scenarios as a woman I would be on the receiving end of what Serano calls a double standard, which is the terminology she wants to use instead of referencing a monolithic gender system.  A lot of what Serano does in the second half of the book, trying to reframe what has been seen as part of the gender system or the patriarchy or heterosexism or etc. as double standards, just kind of read to me like, uh…and? So what?  The reframing doesn’t add anything to the debates Serano is intervening in.  At this point, Excluded begins to sound repetitive and the language becomes clunky.

The other thing is, Serano’s theory about making queer and feminist movements more inclusive isn’t that inclusive of marginalizations that she doesn’t face herself, race and class in particular.  There’s a distinct lack of attention to the material effects of privilege in this book, as if we all just stopped thinking there was a hierarchy between groups like cis / trans and man / woman and stopped applying double standards everything would be hunky dory.  To be clear, I don’t think it’s a problem that Serano focuses on monosexism, cissexism, and sexism—after all, that’s her experience.  But you can’t claim to have formed a general theory of inclusivity in queer and feminist communities that doesn’t apply to class and race!  It’s just plain ignorant.

And how are we supposed to explain to privileged folks the fact that we face a gazillion more double standards than they do?  It just strikes me as an unfeasible practical strategy, that could fall into the kind of thinking where men argue that they are wronged by the patriarchal gender system too (it’s true, they are) so that means they aren’t overwhelmingly privileged by it or that it wrongs everybody so why bother with this feminism stuff.  If we do away with the idea of the over-arching system— that men are seen to be more valuable, authentic human beings than women—and all we are left with are these double standards, how are we supposed to argue against such faulty lines of reasoning?

All this to say that while Excluded is an interesting and well-done book in many ways, it fell short of my expectations.  I would still recommend it to anyone who’s already read Whipping Girl, but it’s definitely Whipping Girl that I would steer first time Serano readers to.  Clearly, I have a lot of thoughts about this book, to Serano’s credit.  I’m interested in seeing how she responds to criticisms of Excluded.