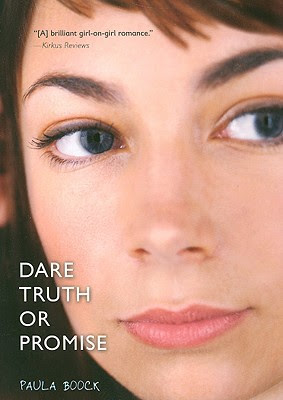 I read New Zealand author Paula Boock’s young adult lesbian novel Dare Truth or Promise (1997) in one day, practically in one sitting.  I have a soft spot for queer YA anyway, but I really loved this book for its sweet, simple style.  Boock writes in a very straight-forward, deceptively plain way that is reminiscent of New Zealanders themselves, at least what I learned about them when I was there for four months a few years ago.  In fact, I’d say this book is a lot like Kiwis and Kiwi culture: humble, charming, quietly proud, and not inclined to boast of its own merits but rather to simply display them as if reassured of its own value.  (Side note: for those readers not familiar with Kiwi culture or English, there is a glossary of terms at the beginning of the book).

Dare Truth or Promise is essentially a teenage love story.  Willa is the bold red-headed daughter of a former-country star-turned-pub-owner, an aspiring chef, and a loving dog owner.  Louie is a charismatic, self-assured actress, stellar student, and frequent poetry quoter from a well-off Italian family.  Boock makes a few interesting (and in my opinion great) choices: she makes Louie Willa’s second same-sex relationship; Willa already knows she’s gay, even though she’s still a bit confused about it.  She also makes the girls come from notably different class backgrounds, which is something I haven’t seen dealt with very much in YA fiction.  Both Willa and Louie have a feminist sensibility about them as well: for example, Willa threatens to cut off the “goolies”—balls—of her work supervisor who tries to pretend patting her on the ass is no big deal—awesome!
I love how the book opens with their first meeting, but presents a little realist twist on the love-at-first-sight trope: “There was a moment, later, that was a lightning strike.  But the first time Louie saw Willa she had just begun the coleslaw.”  Louie and Willa meet, you see, while working at a takeaway (that’s Kiwi speak for fast food restaurant).  The understated way that Boock tells their love story makes the revelatory moments in it stand out all the more:

“I’m in love with that girl,” [Louie] said out loud in amazement, because she knew that this was a life-changing thing and life-changing things should be said aloud, should have a moment in time, and a place in the air, some molecular structure to make them real. I’m in love with that girl, she heard as it reverberated inside her head. And it was a truth, she realized, as things are which you don’t think, but discover have always existed.

The way Boock describes Louie’s sudden realization is so authentic and lovely, don’t you think?  The description of their first kiss is also moving and genuine:

When Willa turned and kissed her, Louie thought in her head, this is my first kiss.  It wasn’t, of course, she’d kissed a number of boys, and done more too, but she’d never, ever felt as if she were falling off a cliff.  She’d never felt before as if her body were being turned to water from the inside out, or as if they were both whirling through space into an airless black vortex.  Louie felt all of these things, and, above all, a disbelief, a wild, terrifying disbelief that this should be happening—no, not that she was in love with a  girl, for it seemed suddenly absolutely natural that she should be in love with this girl—but that, god only knew how, this girl should love her back!

There’s just something that Boock really gets about first love, regardless of gender, that really shines through the whole novel.  I also really loved the realism of the secondary characters’ reactions to the girls’ relationship, in that there were those that were negative and (sometimes surprisingly) those that were positive.  I was especially delighted—spoiler alert!—that Louie’s Catholic priest actually ends up being her ally and that Willa’s mother is supportive from the get-go.  In the end, the book really sustains the idea that teens having to lie about their sexuality and hide who they are is what is harmful to their relationships with their families, not their actual queerness.  Although this is obvious to older LGBTQ folks, it’s a really important lesson for teens just coming out, and for the straight folks around them, and it’s one that Boock puts forwardly firmly but eloquently in this poignant novel.