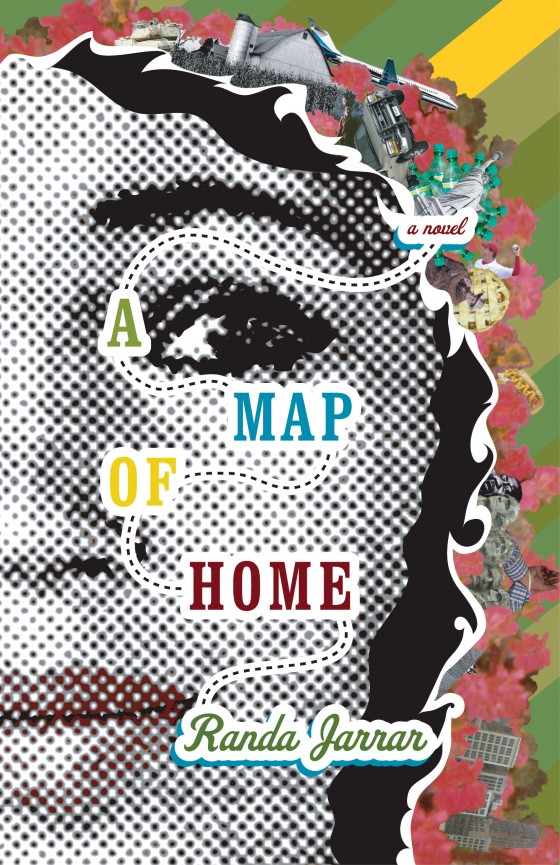 Like many a classic coming-of-age or fictional autobiography, A Map of Home by Randa Jarrar begins with the birth of the heroine.  What you don’t usually see, though, is a screaming match in an American hospital in Arabic between the mother and father after a disagreement about the baby’s name.  If you don’t know any Arabic words, this is an interesting introduction by the main character Nidali’s mother: “Kussy?  Kussy ya ibn ilsharmoota?” “My pussy, you son of a whore?  Don’t concern yourself with my pussy, you hear?  No more of this pussy for you, you … ass!”  When Nidali’s father tries to stop his wife from swearing at the top of her lungs in public, she protests that no one in the States understands them anyway and to prove her point tells a white woman her baby looks like a monkey. The woman nods and smiles.

This beginning sets the irreverent, raw, no-holds-barred tone of Jarrar’s first novel.  Hers is the kind of infectious narrative voice that’s easy to fall in love with; you want to find out what happens to Nidali even before you know much about her.  Actually, just reading the initial description of her on the book jacket should be enough to pique your interest: “the rebellious daughter of an Egyptian-Greek mother and a Palestinian father narrates the story of her childhood in Kuwait, her teenage years in Egypt … and her family’s last flight to Texas.”  The novel is a great mix of what’s now considered history—like Iraq’s invasion of Kuwait in 1990—and personal experience; it’s not that Nidali’s story is interesting because of the significant world events she’s living through but that her individual perspective can teach us about these historical events and this history sheds light on who she is.

In addition to the combination of history and the personal, the novel is a fascinating mix between serious material and a comic outlook.  I suppose it’s that mentality of ‘if you don’t laugh, you might cry.’  Nidali’s father, for example, is both verbally and physically abusive but the tone that the narrator recalls this in is not what you might expect: it’s the same wry attitude she paints everything with.  Recounting the humiliating experience of going through an Israeli checkpoint to visit family in Palestine, Nidali ends the scene by describing a woman whose shoes mysteriously disappear after the intensive search.  After convincing the soldier to return her stolen shoes, the woman says: “First my land, now my Guccis!  Goddamn it.”  It’s hilarious and heartbreaking at the same time—pretty exemplary of this whole book, actually.

The idea of home is, of course, central to A Map of Home.  It’s a feeling Nidali is looking for throughout the story, not quite sure about her father’s proclamation that Palestinians can carry a sense of home around with them.  She just wants to feel like she belongs to a place, and that it belongs to her, and whenever she starts to feel a connection with somewhere, it is ripped from her grasp.  Later on in the book she seems to make peace with this feeling of placelessness while looking at a map:

Jarrar is a talented writer, as you can see in that quotation, crafting unusual and striking similes like “guilt descended like a fat mosquito and sucked out all our blood” and “the onus of renaming a son after my grandfather was [one] [Nidali’s father] brushed off his then-solid shoulders unceremoniously, like a piece of lint or a flake of dandruff.”  I’m really interested to see what she writes next, in particular to see if she focuses on queerness a bit more.  If you’re looking for a book with a lot of queer content, A Map of Home certainly isn’t it; the character is definitely bisexual and talks in passing about her feelings and narrates one brief same-sex experience, but the different gender relationships take up a lot more narrative space.  I certainly wouldn’t fault the novel for this, especially as it ends when Nidali is only in her late teens, but I would be interested to know how Nidali explores her sexuality more in her future.  It would be especially interesting to see how Nidali’s multi-cultural and racial background play out with a non-monosexual identity.  You know, if she was a real person and stuff and not a work of fiction.