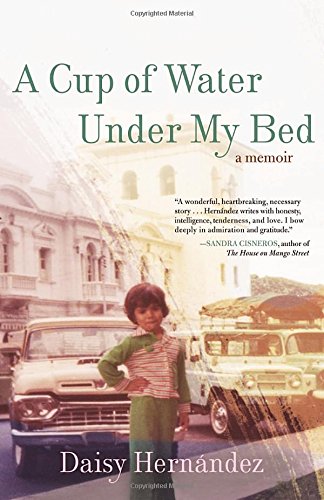 2014: what a year for bisexual memoirs by people of colour!  Among the fabulous Lambda award nominees fitting this category—including Fire Shut Up in My Bones by Charles M. Blow, which I also highly recommend—is A Cup of Water Under My Bed by Daisy Hernández.  Don’t both of those have amazing, intriguing titles?  I simply loved Hernández’s book, on so many levels, for both its form and content.

It’s a memoir, but, interestingly, not structured linearly.  Instead, Hernández arranges the material of her life in three thematic sections, divided into chapters that are self-contained essays.  This structure allows you to see different facets of her life as they exist at different stages of her life, making links between events in childhood and adulthood that you might not otherwise.  Although it feels a bit jarring to move ahead and back again at first, after a while I really enjoyed the way she organized the memoir; it felt tangential in the same way that a conversation does.  One result of the organization, interestingly, is that you don’t actually hear anything about Hernández’s queerness until the second section, although the jacket refreshingly makes her bisexuality explicit.  That shouldn’t be notable, but unfortunately it is, and I was super pumped to see the ‘b’ word right there on the inside flap of the cover.

One other thing that is unique about this book’s format is that the entire thing is peppered with Spanish, always in italics, now and then whole sentences, often just a single word.  Like, there isn’t a page of the book that doesn’t have at least one Spanish word on it.  Sometimes you can guess the meaning of the word from the context, or a translation or paraphrase is fitted seamlessly into the text.  Other times, though, Hernández just lets the Spanish word sit in the English sentence, sin explanation.  Given that she devotes a lot of the memoir to discussing the role of language in her family and her sense of self, I found her decision to include a fair amount of Spanish in a predominantly English book fascinating.  This insistence on her mother tongue seemed to me a distinctly feminist Latina strategy, and a really cool way to illustrate the powerful and sometimes alienating effect language can have.  Anglophones aren’t used to having their easy understanding thwarted, and I thought the Spanish in A Cup of Water was a thoughtful way to draw attention to that privilege.  Also, if you’re learning español like I am, it’s really cool and helpful.

So what does Hernández write about?  In a nutshell: everything.  The first section is devoted to her family and cultural/spiritual background.  Growing up in New Jersey with a working class Colombian mother and Cuban father and a smattering of aunties constantly coming and going certainly gives her a lot to discuss.  Some of my favourite parts were about the intrusion of English in her life as her parents send her to English Catholic elementary school, despite her growing up speaking Spanish at home.  Having only ever heard English in cartoons on TV, she describes her first day of school like this:

Sitting in my classroom, I wait for Mrs. Reynolds to start talking like my mother.  In Spanish.  Surely it won’t be long now.  An hour passes.  Two hours.  An entire day it feels, and still it is all Mighty Mouse… It’s like being forced to watch the same cartoon all day long.

Later she realizes devastating effect of this linguistic erasure:

I am not to go the way of the two people I long for in the thick terror of the night.  The first man I love and the first woman I adore, my father and my mother with their Spanish words, are not in these cards.  The road before me is English and the next part is too awful to ask aloud or even silently: What is so wrong with my parents that I am not to mimic their hands, their needs, not even their words?

There’s a stark honesty in Hernández’s writing, which is especially striking when she’s talking about the complicated stuff of life, like discovering and naming her bisexuality in the second section:

There isn’t a good verb for what begins happening to me in college.  Yes, I am meeting lesbians, but I am not one of them.  I still find men attractive; it is that I am thinking of women in a new way.  It is as if I am learning that I can shift my weight from one leg to the other, that I have a second leg.  Kissing women is like discovering a new limb.

Hernández also addresses racism in all its ugly complexity: for example, her Latin American family’s use of the word india (meaning an Indigenous person) as a threat when she’s misbehaving as a child, their fixation on light skin, prejudice against Black Americans, and the slipperiness of racial categories.  Like how her aunt’s dark-skinned Peruvian husband isn’t “indio” because he drives a nice car and has a good job.  How the white Southern editor at the New York Times where Hernández is working admits to  giving a young African American journalist who turned out to be plagiarizing one chance too many.  How her aunt said she was so dark as a child, “as if the colour of [her] skin had been an illness.”

One unexpected thing Hernández writes about in a startlingly candid way in the last section is money, as well as the related topic of class.  An especially poignant story called “Only Ricos Have Credit” (ricos means rich people) examines her relationship with credit cards, chasing the kind of white middle class lifestyle she dreams of but can’t actually afford.  In “My Father’s Hands,” she writes powerfully about the economic impact of NAFTA, her father beginning a job as a janitor at age 63 after doing factory work his entire life and her mother continuing to work, but sometimes without a paycheque at all, at her factory.

I’m pretty sure I’d have a hard time wrapping up such a gorgeous, far-reaching book, but Hernández does it eloquently in a short, final story in which a new chapter of her life on the west coast is beginning.  No mistaking it, she is a talented queer writer whose first book is, I think, only the dawn of the rosy career to come.  Don’t miss A Cup of Water Under My Bed.