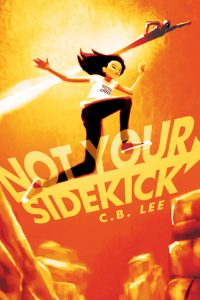 C. B. Lee may have taken the most interesting spin ever on “write what you know” as her protagonist, Jessica Tran, is a first generation Asian American bisexual, just like she is, but the world of her story is certainly not Lee’s lived experience. Jess lives in the North American Collective, a super state formed after WW3, and her Nevada town of Andover is home to two superhero metahumans as well as their dastardly rival villains. Trying to describe this book without it sounding like a mid 1990s cartoon is a little difficult, but that’s because Lee uses comic superhero genre tropes as a backdrop to the narrative’s main concerns. Jess has to deal with several social and societal issues, as well as a little teenage drama thrown into the mix, as she juggles disappointing her parents, figuring out her friends, and a new internship with a mysterious employer.

Lee skirts around the usual race metaphor that people use when dealing with super humans, and instead grabs the subject of race head on, acknowledging the difficulties of the migrant experience. Occasionally Lee pops a word or two of Chinese into the dialogue, which is a welcome reminder that having a non-white character can invite more cultural complexity than simply stating a skin colour. In some ways it was a little disappointing to find that slurs which are currently used were still prevalent in the book’s setting, but I can understand that it is true to the experience that Lee was trying to get across.

Overall this book is great fun. It’s got a whole host of queer characters across the LGBTQ spectrum, and I found it was really good at moving focus between friends, family, and the wider world something which other YA books often struggle with. Despite a couple of heavy handed moments, Lee is great at introducing character’s queerness, including the subtle hints at one of the characters being trans before it’s explicitly mentioned.

When it comes to setting this story in the future, I don’t feel it was totally necessary. In many ways, it feels like Lee chose the future because old superhero comics would often set things in the future, or simply because authors often use time as a distancing tool. It could easily be an alternative version of now, rather than over a century from where we are, and I sometimes felt I was reading two different books, one a future sci fi and another a deeply felt modern high school drama. This feeling did ebb somewhat as the plot came together and certain discordant aspects fell into place. If you’re looking for speculative sci-fi you won’t find it here, but I think Lee does effectively use the setting she has created.

The pacing was good, and even with my misgivings about the setting, I found the plot and characters very engaging. I’m glad it’s part of a series, as a large amount of the narrative was a set up to something much larger, and I would certainly recommend this to readers who want something which isn’t too challenging on its own, but might lead to something more.