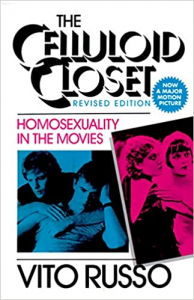 I’ve always felt drawn to queer history; there is a certain comfort in seeing parts of you echoed throughout history, reminders that we have always existed. I’ve always felt attracted to these historical ghosts, found in the coded language of long-gone poets and in unearthed love letters written in candlelit secrecy. Vito Russo’s classic The Celluloid Closet examines the portrayal of LGBT people in cinema from the medium’s inception, tracking the patterns that characterized the media and public’s perception of gay people, and labeling cinematic stereotypes that are still echoed today.

This book serves as a great introduction to queer theory and queer history. However, readers should be aware that this is truly a product of this time; The Celluloid Closet was written in 1981, before the AIDS crisis and the modern gay liberation movement, so some of the language (the use of reclaimed slurs and antiquated terminology) may seem insensitive and outdated if not taken into context. For example, the author glowingly cites Woody Allen as a trailblazing, philanthropic director….

Before Russo’s death, he planned an updated documentary version of the book, eventually released posthumously, in order to include classics from the emergent New Queer Cinema movement, including my favorite film, My Own Private Idaho. I suggest watching the movie to have a visual reference for the more obscure films that are cited. After watching The Celluloid Closet, I would recommend checking out Disclosure, Laverne Cox’s Netflix film about transgender representation in film; it fills in the gaps left by Russo, as The Celluloid Closet primarily focuses on cisgender individuals.

The book is tightly structured in a list format, leading to monotony if not read critically. I suggest reading it in chunks in order to truly digest Russo’s ideas. First, he gives a brief background of the period or archetype that he is dissecting, and then lists queer films and their impact on the era’s media. Russo adds a signature humor throughout his dissertations, imbuing each of the films with character and intrigue. Russo has a dry and infectious wit, best exemplified with his tongue-in-cheek ‘Necrology’ of the various ways gay characters were killed on screen, an early precursor to the ‘Bury-Your-Gays’ trope.

The author takes the reader back in time through the history of cinema, outlining the varied inclusion of queer people. In the early part of the century, gay ‘pansies’ became comedic gags in Laurel and Hardy skits, eventually leading way to hardened butch criminals and lecherous gay killers in noir films. The killer genre eventually transformed to the monster craze of the 1930’s; lesbian vampires have always been a hallmark of the vampire genre since the 1872 novella Carmilla by Sheridan Le Fanu. In the 1960’s, the Hays Code, a Hollywood gag order on the inclusion of explicitly gay characters, was repealed, transforming LGBT characters from invisible phantoms to social pariahs. 1961’s The Children’s Hour has Shirley MacLaine’s character take her own life immediately following a confession of love to Audrey Hepburn. In the 1970’s and early 80’s, gay people were either violent murderers and oddballs, or Oscar-bait-y sanitization of queer individuals, the latter of which is still a prevalent motif in modern cinema (Bohemian Rhapsody). Russo mentions the accolades the film Thank God It’s Friday (1978) received for including ‘gay representation’ in the film of a male-male couple dancing in the background of a ballroom, echoing the introduction of ‘Disney’s first gay character” Lefou in the live action Beauty and the Beast adaptation (2017).

Russo’s The Celluloid Closet reminds us that we still have a lot of work left in terms of queer representation. Russo recently received the honor of having the Vito Russo Test named after him, a measure of how many prominent on-screen characters appear in each media cycle. In 2019, 22 of the 118 highest grossing film of the year featured queer characters, a historic high. However, we are not as far from Buffalo Bill and Norman Bates as we may think we are; cisgender actor Eddie Redmayne was cast as transgender artist Lilli Elbe in The Danish Girl in 2015, Valkyrie’s bisexuality was written out of Taika Waititi’s script at Disney’s bequest in Thor: Ragnarok (2017), and J.K. Rowling has recently transfigured her media empire into a simmering cauldron of transphobic bigotry on Twitter. However, the future’s still bright, as recent shining stars in the cinema canon, including Moonlight, Rafiki, and A Portrait of a Lady on Fire, light our way to proper recognition and representation.