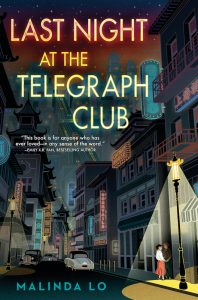 It seems apt to begin 2021, a time of reflection and introspection for many, with a YA novel that feels fresh and timeless at the same time. Malinda Lo’s new novel, Last Night at the Telegraph Club echoes with the same beats as my favorite “baby gay” first lesbian novels (e.g. Annie on My Mind by Nancy Garden and Fun Home by Alison Bechdel), but holds nuance and depth as an exploration of the limitations and restraints of the Eisenhower Era. Malindo Lo explores the role of the “other” in white picket fence McCarthyist America through the eyes of a young girl coming to terms with historical familial trauma, her identity as a Chinese lesbian in society, and future as a woman in a male-dominated field in San Francisco’s post-war Chinatown.

Lily Hu is a “good Chinese girl.” Her father is a reputable family doctor, her mother by his side as a nurse, both parents well-respected members of their tight-knit Chinatown family. There is no room in their community’s embrace for error or deviation, as their neighborhood faces the tides of post-World War II racism and the initial waves of the Red Scare. When Lily discovers an intriguing advertisement for a male impersonator at a local nightclub, The Telegraph Club, she realizes she might not be quite like her cookie-cutter classmates as she once thought.. As the novel progresses, Lily discovers the wonder of the gay underground in The Telegraph Club alongside her close friend, and first love, Kath. Lily must delicately maintain the balance her of double life between Chinatown and The Castro in order to protect her family as they face deportation for supposed Communist ties, and save her new friends, Kath, and herself from the prying eyes of the gay-bashing police.

Last Night at The Telegraph Club has beautiful writing full of detail and care; Lo rebuilds the glitz and glitter of 1950’s era San Francisco before your eyes, situating the reader in the heart of Chinatown alongside the Hu family. The pacing was on the nose for a fast-paced, exciting coming of age novel and I could seldom put the novel down. Malinda Lo celebrates queer friendship and found families in Last Night at The Telegraph Club, one of my favorite themes that is very near and dear to my heart and seldom stressed in novels.

I loved the vignettes between chapters from Lily’s family’s point of view, as it regaled their journey to adulthood as immigrants and children of diaspora as they come to terms with their American surroundings as Chinese outsiders. Lily’s father’s fear of deportation and alienation from his American peers rings true in contemporary America. Personally, I related to Lily’s mother’s fear of being too “Americanized” and distanced from her own culture, as I am the daughter of Cuban immigrants. However, these outside perspectives interrupted Lily’s narrative and felt that they needed more depth in order to remain pertinent to the plot. I also would have preferred some fleshing out of the secondary characters, especially Shirley and Calvin, Lily’s friends who become involved in the Communist Party.

Malinda Lo’s works are already a bookshelf staple for any WLW; Ash and Huntress are often a young gay person’s first book with lesbian characters. Last Night at the Telegraph Club is a fitting addition to Lo’s acclaimed literature, a wonderful coming of age novel full of love and heart. I would highly recommend this new novel, in stores and online on January 19, 2021.

Thank you to NetGalley, the publisher and author for the eARC of the novel!