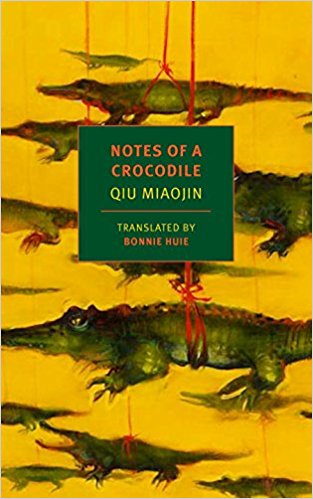 What do crocodiles and lesbians have in common? Plenty of things, as I learned from Qiu Miaojin’s Notes of a Crocodile.

The novel, first published in Chinese in 1994, is a fragmented, broody, and often puzzling coming-of-age tale. The main story is told through journal entries by our narrator, a college student nicknamed Lazi.

In her first year of study, Lazi begins a turbulent relationship with a fellow student, Shui Ling. Although she knows her love for other women is innate, Lazi is filled with self-loathing: she sees her identity as a crime. As a result, she sabotages the relationship to avoid confronting intimacy.

Over the remainder of her college years, Lazi returns obsessively to her experience with Shui Ling, which she sees as her one great love – but only great because it ended before it could become really real. In the meantime, she forms other relationships – some romantic, some sexual, some platonic – with a variety of queer people.

Notes of a Crocodile isn’t a plot-heavy book. Rather, it’s about the introspective development of a character. Lazi is romantic but melancholic, self-absorbed but self-hating. She’s likeable, but she can also be a bit much!

Lazi’s main quest, as I see it, is to learn how to love. More specifically: how to love as a lesbian. With no societal script to guide her, it’s a messy process of trial and error. Her experiences are mirrored by her friends’ relationships, which can be seen as various models for how queer love can be. They’re a vibrant cast of characters, from a loud-and-proud bisexual gangster and his depressed journalist ex-boyfriend, to a try-hard overachiever and her slacker guitarist sweetheart. Getting to know them is one of my favourite parts of the book.

But don’t get me wrong: none of them any good at love either! Lazi has to learn from their bad examples. As she says towards the end, “On how to love well: instead of embracing a romantic ideal, you must confront the meaning of every great love that has shattered, shard by shard.”

And what about the crocodile? Well, it crops up in a series of satirical vignettes that break up Lazi’s narrative – which is much-needed, given how bleak her story can be.

The crocodile has lived its whole life wearing a human suit, trying to fit into a human-normative society. Despite its desperate longing to connect with its own kind, because all other crocodiles also wear human suits, the crocodile can’t be sure that it’s ever met another one for real. Does this sound like a familiar experience? It certainly resonated with my teenage memories!

While society hates and fears crocodiles, it’s also fascinated with them. During the course of the novel, Taiwan’s media is whipped up into a crocodile-frenzy, obsessed with finding out every detail of these outsiders who live among the normal populace. Headlines scream: “BREAKING NEWS: CREAM PUFFS ARE A CROCODILE FAVOURITE!” Should the crocodile feel flattered, or fetishised?

Oddly, although these crocodile sections are humorous, they were also the ones that touched me the most.

Around the time of the book’s first publication, lesbians were under a similar scrutiny in the Taiwanese media. That same year, a TV journalist secretly filmed patrons at a lesbian bar, resulting in many being outed without their consent. In a separate incident, two female students (who attended the same high school where Miaojin had once studied) committed a double-suicide, leading to media speculation that they had been in a lesbian relationship. Medical experts and psychologists were called to comment and analyse the girls’ motives. As Miaojin satirises, “various crocodile experts had begun to crop up” – all of them spouting contradictory pseudo-scientific nonsense.

From the outset, I was expecting this to be a sad book. I’ve read Miaojin’s other novel, Last Words from Montmartre, which is an extended suicide note. Miaojin herself committed suicide in 1995, at the age of 26. So I was unsurprised by how self-destructive the characters in Notes of a Crocodile are.

However, I was surprised by how defiant the book felt as well. Yes, Lazi is miserable, but she keeps on trying to build human connections, to find a love that will last. I didn’t come away feeling miserable. Or, at least, not too miserable. And I enjoyed its puzzles and parallels, the way you have to pick apart metaphors and pop culture references to understand what’s being said. I still don’t understand it completely – but that’s part of what makes me like it.