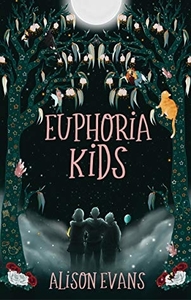 I’ve been reading Alison Evans’ work for a while. The main appeal for me is that they are a Melbournian author, and their YA sci-fi/fantasies always have a basis in the city and surrounding areas. I think I’ve written here before about how much that appeals to me. When their newest book, Euphoria Kids, was announced, I knew I had to get my hands on it.

Euphoria Kids is an urban fantasy that turns magic into an everyday thing for its core group of teens. Iris was grown from a seed in the ground, giving them an affinity for plants and their magical properties. They are a lonely kid, with no human friends – only the faeries that visit them in the house they live in with their two mums. That is, until they see a “new” girl on the bus one day – Babs, who was cursed by a witch and sometimes turns invisible. Babs is made of fire, and lives with her mum, who has fibromyalgia, but still practices magic. A third member is added to their group when they meet a boy who hasn’t chosen his name yet, but who also has something magic about him – what exactly is uncertain.

As is probably clear, this is a diverse group of friends. Iris is non-binary, Babs is a trans girl, and the boy is also trans. Iris’ mums are obviously lesbians, and Babs makes it clear that she is too, as well as a secondary character who works in a café which they love going to. The trio also encounter dryads and faeries – dryads who have no gender, and cannot understand why humans do; faeries who shift between as many genders as they like, as easily as they can change their appearance. I’m loath to say “It’s great representation”, because I often feel that the word “representation” is just used as a catch-all for an identity named in the story, even when that identity isn’t given justice or used naturally. However, that isn’t what Evans is doing at all. The genders of the teens are tied to the magic they learn and explore, almost like being trans is a magic in and of itself.

The writing and story are, in a word, tender. The trio of teenagers are just so sweet and wide-eyed, experiencing this magical word with wonder and care. Their friendship is fierce and loving, and the way they band together to overcome obstacles is very endearing. It is a very kind book – a book that is careful with its characters, with its reader, and with all of the people who may see themselves represented in its pages. The descriptions of magic are ethereal, and the use of plants and connection to nature is filled with all the joy of walking in a secluded forest and seeing light pouring through the trees. It is all just so gentle; the perfect book for reading under a blanket with a cup of tea (and the characters drink a lot of tea too, so you won’t be alone in that).

Something which Evans does very well is write otherworldly things in a convincing way. Of course planting a jar of herbs in the garden works as a protection spell; of course a lesbian couple can nurture a seed that turns into a child; of course a girl can light fires with her touch. Theirs is the type of writing that draws a reader in, and enfolds them in the world that has been created. It’s a book filled with comforting imagery and beautiful turns of phrase – the world of magic is easily pictured, and the use of the Australian bush is wonderful.

I am usually not much of a fantasy fan; I find it confusing at the best of times. But for me, this type of real-world magic is easy to get behind. With friendships at the core of the story, there is something to root for. The characters are all also very appealing – the adults all have magic of their own as well, and treat the three teens with love and respect. It’s just plain nice to read, honestly. While it’s a good entry-level fantasy, it’s also a very witchy story, full of enchantment. And I was enchanted, definitely. It’s a world I would gladly fall into, again and again.

One Reply to “Bee reviews Euphoria Kids by Alison Evans”