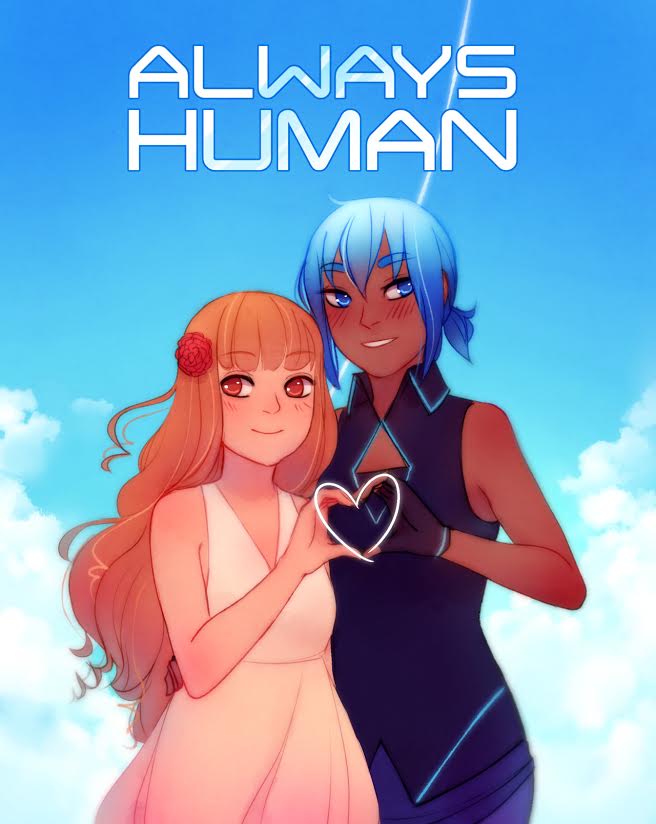 Always Human is a sci-fi webcomic set in 24th century Australia, where people now use ‘mods’ to essentially continually genetically engineer themselves – ranging from anti-cancer mods to fashion mods. People who don’t/can’t use mods are at an automatic disadvantage, particularly in terms of schooling – they can’t use memory mods and focus mods like the rest of their peers. Suntai is 22 and interning at a virtual reality company, while Austen is an 18 year old genetics major at uni. They meet at a train station, and the story goes from there.
I love this webcomic. It’s adorable, the art is amazing, the concept is great, it’s really diverse… I just love it. It’s really refreshing to read something set in Australia, even if it’s not exactly my Australia – it’s set in future WA, for one thing. (We still have vegemite, it’s all good). The vast majority of queer literature I’ve read is set in America, which is fine, but it’s not a culture I’m super familiar with or 100% comfortable in.
While the story is a romance, it’s also a meditation on how humanity interacts with technology, and an exploration of the pros and cons of that relationship. The worldbuilding is so good. It’s evident that Ari’s put a lot of thought into it, and there are some great little details, like the debugging scene, which makes her world seem very realistic. I’d be interested in knowing what mod access is like in terms of money and class, but it’s set up so issues like that can be explored in the future. If not, Ari does answer questions both on her tumblr and in Q&A pages.
One thing I particularly love about this comic is that future Australia has a lot of diversity – just like current Australia – but it’s accepted and normalised and lovely. Lots of the cast are racially and ethnically diverse, including our two main gals; we have an asexual character, and at least two non-binary people. The technology fits in with gender diversity really nicely: instead of needing surgery and hormone treatments if you want to transition, you just buy a mod – which is even cooler for non-binary or agender people because, while the majority probably couldn’t afford to do it daily, if you feel like changing it up, or become dysphoric, you can go right back.
I’m not going to go much into the details of the relationship, because I don’t want to spoil anything. It’s adorable and I love Suntai and Austen. Their friends are really sweet as well. I also love the way Ari uses their relationship to explore their world, and how problems are dealt with in a healthy and communicative way. It’s lovely. So far, it’s what Danika would call a cotton candy comic. AND I LOVE IT. I spent my read going “ugh it’s SO CUTE I WANT A GIRLFRIEND”.
Always Human updates on Saturdays, and is currently two chapters into its second season. If you’re looking for a lovely, light read with beautiful visuals, this is for you.
No trigger warnings I can think of, unless you’re a little leery of discussions of hospitals and chronic illnesses.
This and other reviews by Aoife can also be found at https://concessioncard.wordpress.com/.