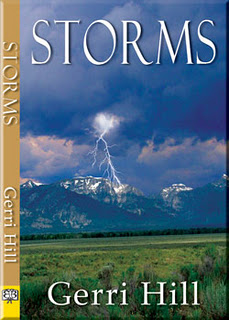 I’ve read almost all of the books Gerri Hill has written. I’ve enjoyed romances like Behind the Pine Curtain and Love Waits and been more skeptical of recent “action-romance” pieces like The Scorpion. Thankfully, Storms (2011) falls more into the mold of the engaging romances I favor, in both good and bad ways.

Carson Cartwright is an heiress who has spent the many years since being exiled from her family’s Montana ranch traveling and having casual sexual encounters. She is very careful not to get too attached to any person or place. When her twin brother, Chase, entreats her to visit their father on his deathbed, she returns home for the first time since her mother’s tragic death–for which she was blamed by her father. The prodigal daughter is not welcomed back with open arms by all of her four brothers or her father, however. She soon discovers that the ranch is failing, and the brothers have grudgingly agreed to hire an attractive consultant, Kerry Elder, to advise them on transforming the property to a lucrative guest ranch.

Carson immediately perks up upon encountering Kerry, even though her brother Cody (all of the siblings have C-names) feels that he has a prior claim and warns Kerry of her woman-stealing ways. Kerry, who considers herself straight, was not above strategically flirting to get a contract, but bristles at Cody’s protective attitude. When the women are left alone together as the brothers participate in the ranch’s cattle drive, sparks begin to fly as storms rage across the prairie landscape.

The chemistry between Carson and Kerry is believable and ably depicted, although I did sigh a bit when I got to the “Kerry isn’t straight, she’s just never been with a woman before!” discussions. The book was comfortably predictable in terms of the romance, employing such tropes as the older housekeeper who secretly roots for Carson and Kerry to get together; the jealous and violent family member; the prodigal child returning; deathbed drama; and violent storms as a metaphor for internal turmoil. However, all of these things are well-worn and recognizable in the way a favorite pair of shoes might be. And I will likely wear this pair again, the next time Hill releases a book.

One Reply to “Anna reviews Storms by Gerri Hill”