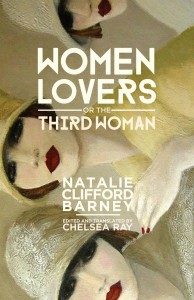 Women Lovers or the Third Woman by Natalie Clifford Barney is an intense and poetic modernist novel about three women (N, L and M) deeply devoted and in love with each other, and chronicles the transformation of their relationship. The idea of the “Third Woman” is not only a reference to one of the women in the novel being left out by the others, but also to the idea that being a lesbian was being part of a “third sex” (something also explored at around the same time by Radclyffe/John Hall in The Well Of Loneliness and by various sexologists circling around at the time). The novel is also an exceedingly thinly veiled autobiography about Barney’s relationship with Mimi Franchetti and Liane de Pougy, both key figures in sapphic Parisian (generally immigrant) circles in the 1920s.

The language of the novel (in translation from French) is electric and so alive and sensual, just as the love story and relationships it depicts are. L is a decadent woman whilst M is frenzied and soft – “Her hands are more evolved than she herself is, and they get hurt on everything, just as souls do.” Barney’s description of herself, of the character N, is a potent snapshot of a person who constantly feels like the odd one out: “she communes with humans through joyful pleasure, even though she seems to miss out on it in every other way”. I think something in this novel that made it even more captivating than a queer love and loss story might have been is this positioning of some people as “thirds”, as constantly missing out because they don’t have a singular partner or relationship that consistently puts them first. It reminded me a little of this article that Caleb Luna wrote about being “denied intimacy and care… who reserve it for others” the ways that people undermine platonic relationships by focusing so intensely on romantic coupling. Obviously N in the novel has multiple other pairings, so its not an entirely accurate comparison, but I think it adds interesting current contexts for the novel.

The earthy but whimsical tone of Women Lovers as well as the descriptions charmed and inspired me so much. As someone studying the period, it’s also interesting to see who else weaves their way into and through the narrative, from their “Dearest Friend” (the artist and long term partner to Barney, Romaine Brooks) to “The Newly Miserable Woman” (Djuna Barnes author of Nightwood and The Ladies Almanack), as well as references to Radclyffe/John Hall and her partner Lady Troubridge.

Although this word is never used in the novel, it is clear that N and the women she is involved with are in some way polyamorous: they generally participate in and create non-monogamous relationships with each other, overlapping intimacies, so it’s a record of the way that historical queers connected separately and related to their communities and their partners/lovers/friends. The other really enjoyable part of reading this novel is the many ways in which the current sapphic and queer community I witness and participate in mimics these wild lesbian and bi+ women from almost 100 years ago! Just like when I read The Ladies Almanack, this novel/autobiography made me really feel like nothing has changed – we make the same jokes, we care about the same things, we use similar imagery and vocabularies, we have the same issues to work through, we are all dating each others exes and so on!