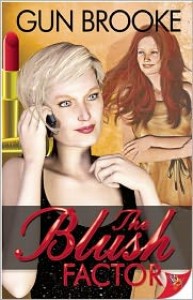 Gun Brooke’s The Blush Factor, released this month by Bold Strokes Books, features a May-December romance between a savvy businesswoman and an entrepreneurial YouTube sensation. Eleanor Ashcroft has kept her distance from most people in her years as a corporate shark, but something about Addison Garry’s self-made celebrity catches her attention. Addison, also known as Blush, runs an amazingly popular YouTube channel featuring makeup and styling tips, and Eleanor is in the market for an expert to help her revitalize her aunt’s former makeup company. It doesn’t hurt that Addie is very easy on the eyes–Eleanor finds herself watching the videos over and over again.

Addie takes the job primarily to help her kid sister–their parents died many years ago, and she’s responsible for the teen’s well-being. Stacey has a medical condition that will require surgery, and they need all the money they can get. Addie proves competent as well as beautiful, and the women find themselves intrigued by one another. Despite their age difference, Addie and Eleanor’s business relationship progresses toward intimacy; however, Stacey’s condition leads to an episode that puts their future as a couple in jeopardy.

I’ve read and enjoyed many of Gun Brooke’s books, and I will likely keep reading after The Blush Factor, but there was something about the book that felt unfinished. There was definitely chemistry in the romance between Eleanor and Addie. Perhaps it was that beyond those two characters, and the younger sister whose illness is the catalyst for much of the dramatic action, there wasn’t much definition. Addie is hired as a consultant on the beauty industry, and The Blush Factor seems to be set up as a workplace romance, but very few scenes actually took place at work. We didn’t get to see Addie’s expertise actually come into play on Eleanor’s behalf, we were just told after the fact that the business was revitalized. Conflict between the characters over the payment of medical bills was fraught but, even after Addie explained her extreme reaction, still a bit confusing. I enjoyed it, but it wasn’t my favorite of her books.

For a good lesbian “boss romance,” try Too Close to Touch by Georgia Beers or even Rulebreaker by Cathy Pegau.

One Reply to “Anna M. reviews The Blush Factor by Gun Brooke”