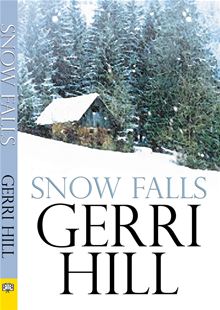 Gerri Hill’s latest romance, Snow Falls, was published in December 2012 and revisits a setting and characters from an earlier novel (No Strings), although it features a new pair of women: the reclusive heiress Catherine Ryan-Barrett, known as Ryan, and the aspiring novel writer Jennifer Kincaid. Jen becomes stranded in the Colorado mountains on her way to a writer’s workshop, and Ryan comes to her rescue as the yearly avalanche thunders down the mountain–at the cost of her prized solitude, as it means that they will be stranded together in Ryan’s secluded cabin until the roads become passable again in the spring.

Ryan has spent the last 10 years hiding from her family and her family’s fortune after publishing a Pulitzer Prize-winning book. She’s been looking forward to spending the next several months alone, working on her next book. Although she becomes resigned to sharing her space and food with a stranger for six to eight weeks, she isn’t willing to share information about her past with Jen, or reveal that she’s a writer herself. When the relationship between the women settles in to friendship and eventually mutual attraction, Ryan feels that it’s too late to come clean about who she really is, even though she feels closer to Jen than she ever has to anyone.

Homeschooled through high school, Jen was raised by very conservative grandparents, and the idea that Ryan is a lesbian is startling to her at first. But Jen has spent the last several years putting some distance between herself and how she was raised, and her natural curiosity–and the close quarters–lead her into an easy friendship with Ryan. And since Ryan claims to be an editor, she spends some time learning about the craft of writing as well. Soon their closeness erodes the personal space she’s always carefully maintained, even with her boyfriend . . .

When the snow thaws and Jen returns to her job and boyfriend/potential fiancé, Ryan is left to the solitude she once prized, wondering if she and Jen will ever share anything more than a passionate kiss. After weeks of enforced companionship, “getting back to normal” turns out to be very lonely. [spoiler, highlight to read] With the help of Ryan’s friends Reese and Morgan (of No Strings fame), the couple overcomes the barriers between them, including Ryan’s past and Jen’s uncertainty, but not without a nice helping of drama. [end spoiler]

Although I have been getting a little tired of the “discovering I’m a lesbian when I’ve only dated men” trope, it was a solid romance and a nice take on the concept of being snowed in. I did have to overcome my irritation with Ryan for evading the truth about her identity and then missing many subsequent opportunities to rectify that once she got to know Jen. A quick, enjoyable read.