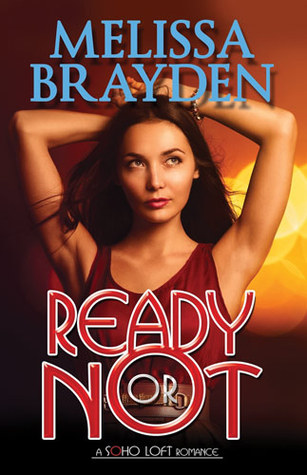 Ready or Not is the third and final book in Melissa Brayden’s Soho Loft series of romances (previous titles: Kiss the Girl and Just Three Words) about a group of four women who run an advertising agency named Savvy. Having successfully paired off everyone but the firm’s go-getting leader, Mallory Spencer, Brayden turns to her remaining task with zeal, pairing Mallory with the equally driven Hope Sanders.

As Savvy’s public face, Mallory draws upon her upper-crust background, killer instincts, and impeccable taste to make the business successful. Lately, she’s been feeling a little left out, given that all her friends have found romantic partners. Brooklyn and Jessica, who were featured in Kiss the Girl, are even relying on her to help plan their wedding. She is definitely not interested in the hot bartender, Hope, who always sends her free drinks at her favorite bar.

Hope Sanders is an entrepreneur whose bar, Showplace, has been a regular setting throughout Brayden’s series. She’s always been attracted to Mallory, despite the fact that she considers her a snob. She’s got an identical twin sister who’s been in her fair share of trouble but is trying to start her life over. After Mallory’s friends engineer an encounter between her and Hope during one of Mallory’s Hamptons house parties, the pair realize they have amazing chemistry despite the difference in their financial backgrounds. When Hope’s sister and business end up in trouble, will their chemistry and fledgling bond be enough to keep them together?

I enjoyed the emphasis on real problems–moneylending between partners is always a thorny question–but I was never quite clear on why Mallory resisted Hope for so long. Mallory is really made of stern stuff, which probably contributes to her appeal. I also appreciated the way Brayden continued plotlines from the first two books, wrapping up neatly with a wedding for her first pair. The trilogy was enjoyable and definitely worth a read if you’re looking for solid romance or interconnected stories about a group of friends.