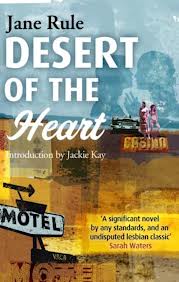 I became aware of the movie Desert Hearts (1985) when I (like the protagonist of the film It’s in the Water) was scouring my local video stores for movies with lesbian content. It was the mid- to late-90s, and there were still stores with actual videos in them. I have watched Desert Hearts–and Go Fish, and The Incredibly True Adventures of Two Girls in Love–many times since then, having procured my own VHS copies in order to avoid having to make eye contact with any video clerks in Salt Lake City. But for some reason my search for lesbian content never lead me to Jane Rule’s Desert of the Heart (1964) the book on which the movie was based. When I got the opportunity to read it via the Lesbrary, I also re-watched the movie (just as Mary did for her recent episode of Queer Books Please–I swear, I was working on reading the book before then!) for the purpose of comparison.

The general plot of both the book and the movie are the same–in the middle part of the 20th century, a college professor moves to Reno in order to procure a divorce. While staying at a boarding house set up for divorcing women, she meets a young and vibrant artist who also works in a casino. They fall in love, disrupting the professor’s vision of herself and her future, but at the end it seems like things just might work out for them.

Rule herself co-wrote the movie, which is a lot less . . . cerebral than the book, which concerns itself with questions of morality and other philosophical ideas. There is also a great deal more musing on casinos, especially Ann’s job and how it informs her artwork. Ann and Evelyn (Kay and Vivian in the movie) often came across to me as creatures of great, almost impenetrable complexity. Perhaps it was because I’m unaccustomed to reading works that require my absolute concentration, but I found the book a bit difficult to parse at times, although the prose was lovely. It made me miss the desert, which was a frequent background to my childhood in Utah. Rule’s way of describing it was utterly clear and evocative.

I’m glad I read the book, and would be interested to read more by Rule. If nothing else, it was a good exercise in comparing movies to the books from whence they came–in this case, I can see Rule’s hand in both, and I noticed certain things while experiencing each medium. For example, in the book Ann’s family is much kinder about her involvement with the outsider Evelyn, wanting primarily for her to be happy. The Frances of the movie is strangely in love with her adopted daughter, and that emotional entanglement is very painful to watch play out. My advice is to experience both–the movie for its great visuals and almost wry humor and the book for that rich internal life of both protagonists. The words “lesbian classic” definitely apply here.

Apparently a Desert Hearts sequel is in the works!

Anna M. tweeted “Now that @booksnyarn has seen Desert Hearts, she wants to know what happens next. Any fic out there? pic.twitter.com/OoMvlT5geb”

and Donna Deitch (@DesertHearts), director of Desert Hearts, replied “@helgagrace @booksNyarn Not sure about any fan fiction, but if you can stand the wait, a sequel is in the works!”

5 Replies to “Anna M. reviews Desert of the Heart by Jane Rule”