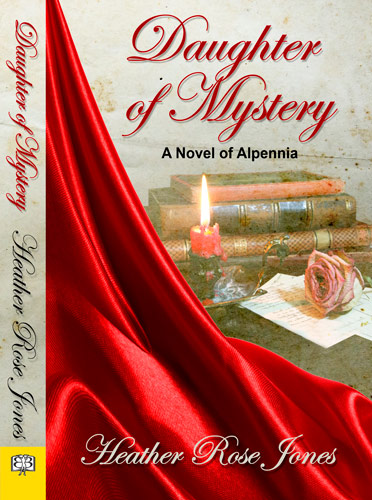 Daughter of Mystery is a debut historical fantasy/romance by Heather Rose Jones set in the tiny, fictional European country of Alpennia in the early 19th century.

Baron Saveze of Alpennia has spent his life amassing a prodigious amount of wealth. A capricious man, Saveze has long kept a female duelist in his employ, despite it not being quite “the thing.” Barbara has spent many years serving as the Baron’s personal bodyguard and duelist, but the ailing Baron has–in her eyes–promised her freedom upon his death. Margerit Sovitre is the baron’s goddaughter, though connected only distantly and from a much more humble background. She’s being introduced to society and is expected to make an eligible marriage, but Margerit would much rather be studying philosophy at the university than finding a husband.

Upon the Baron’s death, Margerit suddenly finds herself in possession of a large fortune…and Barbara. Enraged that she’s been denied her freedom–at least until Margerit comes of age–Barbara nonetheless accepts the task of keeping her new employer safe. One person in particular, the new Baron, bears a grudge after inheriting nothing but the title from his uncle. When Margerit decides to pursue her mystical studies in the capital, there are unforeseen threats that even Barbara might find difficult to overcome.

It may sound strange to say that a fabricated country felt well-researched, but it’s clear that Jones did her homework in terms of crafting Alpennia from a combination of historical and fantastical detail. All the subtle pieces, down to the particularity of the names and their pronunciation, felt like they contributed to a vibrant and compelling whole. If you like women with swords, court intrigue, mysticism, interesting female characters, dashes of romance, scholarship, and family secrets, give Daughter of Mystery a try. Especially recommended for fans of Sherwood Smith.

I’m an avid reader of historical romance, particularly Regency and Georgian, and Daughter of Mystery had just the refreshing twist I’ve been looking for. News of a sequel in the works made me very happy indeed. See this post for more about how Jones approached her work.