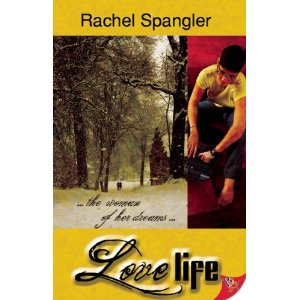 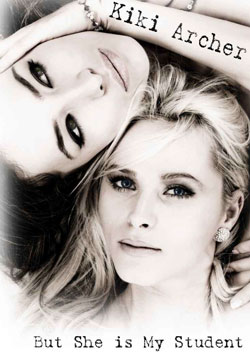 Putting potential lovers in unequal positions of power and seeing what happens is a commonly used technique in romance novels. Current heterosexual romance novels are littered with boss/secretary and boss/nanny relationships, which . . . ick. So I found it heartening to read two lesbian romances recently, But She Is My Student and LoveLife, which explore similar power dynamics without the “ick” factor. Both of them feature couples who [spoiler] do not give in to temptation when it could be construed as an abuse of power.

But She Is My Student, by Kiki Archer, is a British romance that centers on newly minted teacher Katherine Spicer. The weekend before her first teaching job, Kat makes an instant and deep connection with another woman that she meets at a gay club. She doesn’t know anything about her mystery woman, who disappears suddenly, but her face is all too familiar when it pops up among the students in her senior-level class. Freya Elton was tagging along with her lesbian cousin when she met–and kissed–the woman of her dreams. But when she finds out that her Kat is “Miss Spicer,” she’s at a loss. Despite the fact that she’s only a few years older than Freya, dating a student is a line that Kat absolutely will not cross.

Another girl in the class, Bea, has her sights set on Freya, further complicating the plot as Archer explores the question of what happens when you fall in love at first sight with someone who is off-limits. Archer rounds off the love story with an uneven cast of characters–students, administration, teachers, and Kat’s roommates–whose storylines are intertwined. Although the work could have used a few more passes under the eyes of a careful editor, the central conceit was engaging and it was satisfying that neither Kat nor Freya gave in to temptation while their student-teacher relationship continued. Some of the obstacles between the pair were a bit of an imaginative stretch, but overall But She Is My Student is a sweet story with the title of a Lifetime Movie.

In LoveLife, by Rachel Spangler, working-class Joey has an overwhelming crush on the professional-looking woman who regularly visits the coffee shop where she works. Through her best friend’s machinations, Joey discovers that the woman is a life coach named Elaine, which only deepens her feelings of inadequacy. As a college dropout who has spent the last several years supporting her bereaved father, Joey has trouble believing that she deserves love from anyone, let alone someone like Elaine. For her part, Elaine has just moved back to Buffalo to reconnect with her family, but finds herself falling into old patterns instead. When Joey’s meddling best friend Lisa sets her up for a consultation with Elaine, she finds herself opening up to the life coach about her lack of confidence . . . and her desire for a seemingly perfect woman. As Joey realizes that she could actually benefit from coaching to get her life back on track, she also understand that she’s put Elaine in the awkward position–once she reveals that her dream woman and the life coach are one and the same–of continuing a professional relationship begun under false pretenses.

Joey and Elaine are both very relatable, and Spangler does a good job of carefully nurturing the spark of their attraction as they struggle to keep their client-advisor relationship professional. She throws in Buffalo-specific details for spice, but characters beyond the two women (and Joey’s lifelong friend Lisa) are a bit more roughly sketched. It’s clear from the book that she did her homework when researching life coaching, and the novel fairly glows with its characters’ earnest approach to self-improvement. After an almost agonizingly extended will they/won’t they, Spangler ties up the threads in a satisfactory way.