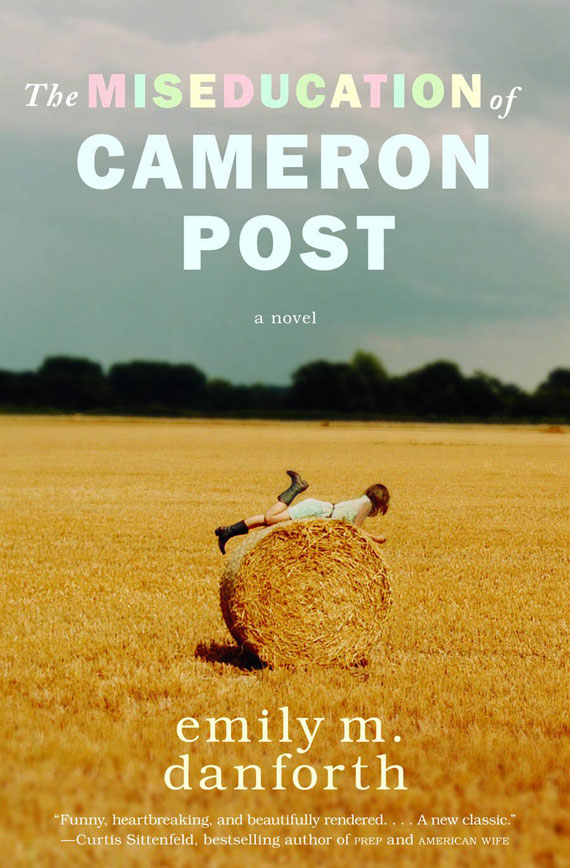 Emily Danforth’s debut young adult novel, The Miseducation of Cameron Post, got several positive reviews in the mainstream media (I heard about it from NPR, but it also got a coveted starred review from Kirkus). Miles City, Montana native Cameron Post is twelve when her parents are killed in a tragic accident near Quake Lake. Because she had just kissed her best friend Irene (and liked it), Cameron feels a certain amount of responsibility for their deaths, as well as relief that they will never find out. She withdraws into a world of video rentals and creative activity centered around decorating an old dollhouse with scraps and pocketed mementos. In high school, she strikes an uneasy balance with her grandmother and conservative Christian aunt while pursuing her own small-town rebellions. . . and the friendship and attention of the beautiful Coley Taylor. When the sexual tension between Cameron and Coley comes to a head, Cameron ends up at God’s Promise, a conversion camp for gay teens. There, despite the restrictive environment, she begins to address her feelings about the loss of her parents and come to some kind of peace with herself.

There’s a lot in this snyopsis that I’m leaving out: the importance of Quake Lake to Cameron and her family; Cameron’s boy/friend; her first fling and lesbian know-it-all friend Lindsey; little details about the town and the landscape of Montana; Cameron’s friends at God’s Promise, including Jane Fonda and her prosthetic leg; the early 90s references; the process of the conversion therapy . . . the book is not easily summarized, which is one of its strengths. It’s a complex narrative that weighs in at around 500 pages and apparently could have been much longer (great interview, scroll down for a mention of a “lesbrarian”). Danforth deftly weaves the threads of setting and plot together in such a way that the book’s length feels justified–a slow burn–rather than oppressive.

The story is set in the author’s home town, and Danforth calls the work an “autobiographical novel.” It’s clear from the detail that her Miles City is grounded in the real Montana, even as she adapts it to suit the needs of Cameron’s story. The chronological setting of the book is also intriguing. It opens in 1989 and follows Cameron through her first few years of high school. This mirrors my own experience almost exactly; I graduated from high school in 1995. The internet looms large due to its absence–if only it were a few years later, the reader thinks, Cameron could see the larger community of people that awaits her outside the boundaries of her world. Lindsey provides a glimpse of that wider world, from her liberal Seattle enclave, but wider acceptance will have to wait until Cameron comes to terms with herself and finds her own place.

It’s interesting that Miseducation was blurbed by Sarah Waters; the scope of Danforth’s work sometimes recalls the narrative sweep I loved about Tipping the Velvet, although the settings have very little in common. They are both lesbian coming-of-age stories, and Cameron and Nan are similarly out of their depth as they make their way through an unsympathetic and sometimes hostile world. Danforth leaves the ending somewhat open–Cameron has done some of the work she needs to do, especially where her parents’ deaths are concerned–but the book left me with a “what happens next?” complaint. I would like to spend more time with Cameron as she continues to grow up, and I wonder what’s next for Danforth.

3 Replies to “Anna M. reviewed The Miseducation of Cameron Post by Emily Danforth”