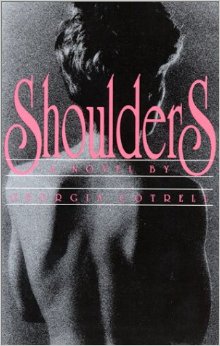 Shoulders seems like a fictionalized memoir, but reads like a conversation with an old friend. Georgia Cotrell tells the tale of Bobbie Craword, innocent, personable lesbian, and her coming-of-age in the 1970’s. And then it tells of the fallout of all of her decisions in the 1980’s. At moments both heart-warming and anxiety-inducing, Shoulders is one of the most realistic portayals of developing sexuality I have come across.

This novel was published by Firebrand Books, an amazing short-lived lesbian and feminist book press in Ithaca, NY, in 1987 and only received a first printing, which is a shame. Cotrell herself is described on Goodreads as “a software developer and author from Austin, Texas. Her novel Shoulders was published in 1987.” That’s it, just the one book in one printing, which fits my theory that this book is more memoir than fiction.

What I find most refreshing about Shoulders is that it isn’t about the anxiety of figuring out that you’re gay. There’s no angsty self-doubt about being a lesbian, just acceptance that ladies are the prefered romantic interests.

Cotrell reveals Bobbie to us in short chapters, flashes in time. We are taken from her childhood to her teenage years to college in the first few pages. The innocence of childhood sexuality continues throughout her life in the form of romantic innocence. Most of the time Bobbie just doesn’t seem to know what she is doing. She lets her circumstances carry her in confusing and opposite directions throughout her life. I found myself forgiving her for quite a few betrayals and questionable decisions. Perhaps because I could see myself making the same “mistakes,” perhaps because I had grown to love her so dearly.

She meets, loves, befriends such a multitude of women. There are so, so many distinct female characters in this book. That by itself was fascinating and healing and wonderful. Early on in her life she meets Rachel, her dance instructor, who helps her learn about herself. In college she meets the kinds of energetic, life-changing women intellectual environments can offer you. And later in life she find Miriam, who changed my life just by imagining that someone like that might actually exist.

Al Rosenberg: Al is Games Section Editor of WomenWriteAboutComics.com. She loves lesbians, lesbians in literature, and the perfect mystery novel. Currently in Chicago working on her tattoo collection.