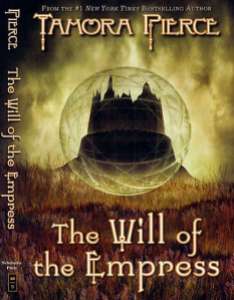 A little bit of background on my experience of this book, first. I have always heard positive things about Tamora Pierce’s writing, but I hadn’t picked up any of her books before this year. I did, however, have a copy of Will of the Empress, because I heard this was a lesbian young adult book, which is probably my favourite genre. I was also going to see Mark of Mark Reads at Leakycon in 2014, so I decided that I would try to catch up one of the series he was reading. He was reading Tamora Pierce, so I binge-read her books to catch up, in the order that Mark was reading them, which was mostly publication order. But because I was reading them in the order Mark is, it meant that Will of the Empress was the twenty-sixth Tamora Pierce book I read this year. And the entire time, though I loved the other books, I was also eager to get to The Lesbian Book, so I had some expectations.

Will of the Empress is listed as the first book in a series (The Circle Reforged), but the main characters are written about in The Circle of Magic quartet and The Circle Opens quartet first. I’m sure you could technically read this as a standalone, but it’s a lot more effective knowing the main characters’ backstory.

I was already in love with the main characters before going into Will of the Empress. The funny thing is, I knew that in this book, one of the characters was going to be a lesbian, but I wasn’t sure which of the three girls it was. Which meant that in the previous eight books, I was guessing. It was fun, actually, even though I picked the wrong horse. My favourite thing about Tamora Pierce’s books (aside from the feminism) is that the main characters in all of her novels are totally realistic, well-rounded, and completely distinct from each other. I loved that in the Tortall books, and it carries into the Circle universe as well. I also really appreciated that the Circle universe is a lot more diverse. While most of the Tortall protagonists are young, female, white, straight, and noble, the four Circle main characters include two people of colour, a lesbian, and a range of financial statuses/ranks. This book also reveals that their teachers (also about half people of colour) included two women in a relationship, something which was only hinted in the previous books.

This book focuses on how the four have drifted apart from each other, and their attempts to return to their former closeness. It’s uncomfortable, after the celebration of friendship that was the original Circle quartet, but it’s realistic and necessary. They all have grown, and their relationships all shift and evolve throughout the story to reflect that. The plot itself is pretty minimal, because it’s really about this emotional growth, and also about their beginning of their individual recoveries from the trauma each has gone through in the last few years. Between them, they’ve experienced arson, mass murder, war, and been dragged into these situations in ways they never intended.

So there is this aspect to the subdued plot next to the other books–that the characters have suffered enough at this point–but I think there’s also the element that they are just too powerful by this time, especially together, for there to be any real threat to them. Each not only has an incredible amount of personal power, but also has threads of each other’s magic, and now has mastered this magic. When the central conflict of the book does happen, it’s over with pretty quickly. They’ve become pretty much invincible as a unit, which I think sort of writes Tamora Pierce into a corner. Anything that could actually pose as a threat to them would be comically over the top. And though I do primarily enjoy her books for the characters and their interaction, it did make this one seem a little slower, because there was no dramatic conflict in the last quarter of the book, at least not one comparable to most of hers.

As for the lesbian content of the book, it is a pretty minor subplot, but I loved it. I won’t tell you who it was, in case you also want to guess, but it felt perfectly organic both for that character to be a lesbian and for it not to have come up until now. After all, the other books take place when they are children, often in life-threatening danger, so it makes sense that she didn’t really start thinking about romance until she was an older teenager. The little romance in this book was adorable. [mild spoilers, highlight to read] I was worried that her partner was going to be a spy, or somehow involved in the plot against them, but luckily I was wrong. [end spoilers] It’s also significant that this romance is probably the most serious one in the series for any of the characters. The descriptions of her realizing that she’s falling in love and what that means as well her friends’ reactions are all fantastic to read and exactly what I would expect from Tamora Pierce. I really hope that she continues to write more queer main characters.

This isn’t my favourite of her books, though I honestly expected it to be, but it’s still solid, and one that I would recommend. Read all of her books and know that you can look forward to a lesbian main character. I can’t believe that I’ve read almost all of Tamora Pierce’s books (thirty years of work read in one year! oops!), but I’ve enjoyed myself so much. I can’t wait to read the last collections of short stories and audio books that are left, and I look forward to her next ones!