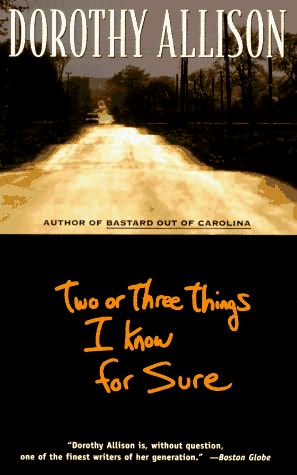 I love this book. Love, love, love. If you’re a lesbian book fan, and I’d be pretty surprised if you’re reading this and aren’t, you’ve probably heard of Dorothy Allison’s lesbian classic Bastard Out of Carolina. I haven’t read that one yet, but I’ve been wanting to for a long time, so when Two or Three Things I Know for Sure was one of the few books left unpacked, I thought I’d give it a try.

Two or Three Things is a memoir of Dorothy Allison’s, and it even has real photographs of her and her family interspersed throughout. It is a very quick read: less than 100 pages. In fact, I enjoyed it so much and finished it so quickly that I ended up re-reading it shortly after. There are two themes that crop up over and over again throughout Two or Three Things: Allison as story-teller and the phrase “two or three things I know for sure”. I found myself wanting to quote almost every variation on “two or three things I know for sure”. In fact, I probably will gather up a bunch of quotes and post them on tumblr at some point.

Two or Three Things is partly about growing up poor in the rural South. It’s partly about family, especially the women in her family, and how life wore them and her down. It’s partly about her rape. Allison isn’t ambiguous about being a lesbian, but it never seems to be a big issue for her. She weaves all of the different themes together extremely well. Unsurprisingly, it’s not a totally chipper book, but it’s honest and very well done.

Dorothy Allison is clearly a master, and I can’t wait to read some of her other books. I highly recommend this one.