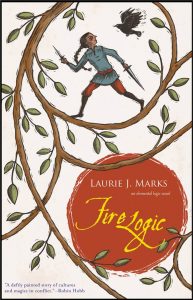 If you’re sick of only reading coming out stories (not that there’s anything wrong with coming out stories, but sometimes it’s nice to have some other plot), try reading some Fantasy/Sci Fi lesbian books, because they can just not make it an issue. It’s so refreshing! Zanja, the protagonist (and the woman on the cover, I assume), is attracted to women (exclusively, as far as we know), but it’s not an issue. In fact, there are more same-sex couples in the book than opposite-sex, but it’s never mentioned or agonized over, it just is. It’s so refreshing!

I’m still fairly new to Fantasy books, but I really liked Fire Logic. As usual, with the fantasy books I’ve read, I was totally over my head in the beginning and didn’t understand the politics or names, but unlike some of the other Fantasy books I’ve read, I actually feel like I understood it in the most minimal way by the end! That’s exactly how it should be: not taking me by the hand and introducing every element, but providing enough detail so that being immersed in eventually imparts some understanding.

I apparently enjoy stories where people travel, because I’m going to mention it again in the review of this book: I like the travelling scenes. I liked how the book had several different plot arcs happening in a succession, not just one overall one. And most of all, I liked the love story. I was rooting for them, but the drama seemed very real and not just contrived to keep them apart. The love story was an essential part of the story, but it also didn’t overshadow the more political aspects; they worked together well.

Overall, though I’m not sure I express it well, I really recommend this book, especially if you’re looking for one where the main character just happens to be a lesbian, not a book where it’s about her being a lesbian.