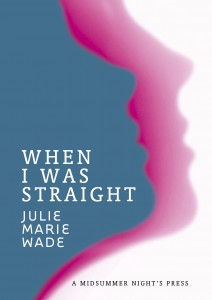 When I Was Straight is a brief (42 pages) poetry collection by Julie Marie Wade. It is split into two sections: “Before.”, in which all the poems are titled “When I Was Straight” and “After.”, which are titled “When ___ Learns I am a Lesbian”. Because the first half of the collection has the same title for each poem, the beginning line is listed in the table of contents, and together they make a sort of poem themselves:

When I Was Straight

As you might be able to tell from those lines, Wade’s poems are deceptively simple. The language is straightforward, but I found myself unable to help but re-read each poem as soon as I finished it, finding new layers each time. Contrast the first paragraphs of the first two poems:

I found myself nodding and smiling at some of the lines of each poem, because Wade communicates some feelings, feelings of not being straight, of growing up repressing that, so concisely and accurately. I think many queer women will enjoy the poems in this first section that capture that feeling. One paragraph that especially struck me was the closing of the second poem, which goes to describe “when I was straight” feeling like being at a slumber party:

I tried to wake the host girl to ask her, but she was
only one adrift in the sea of bodies. I was ashamed
to say they all looked the same to me, beautiful &
untouchable as stars. It would be years before
I learned to find anyone in that sumptuous,

Unfortunately, I didn’t find the second half of the collection as strong. The conversations included there are sadly fairly predictable reactions to coming out to people. I actually thought it might work better being read by a straight person who may be unfamiliar with what happens “When Sharon At Work Learns I am a Lesbian”. That dragged down my enjoyment of the book as a whole a bit, but I still think this one is worth picking up. It would be a good poetry book for someone a little intimidated by reading poetry (like me!), because it is straight-forward and very relateable.