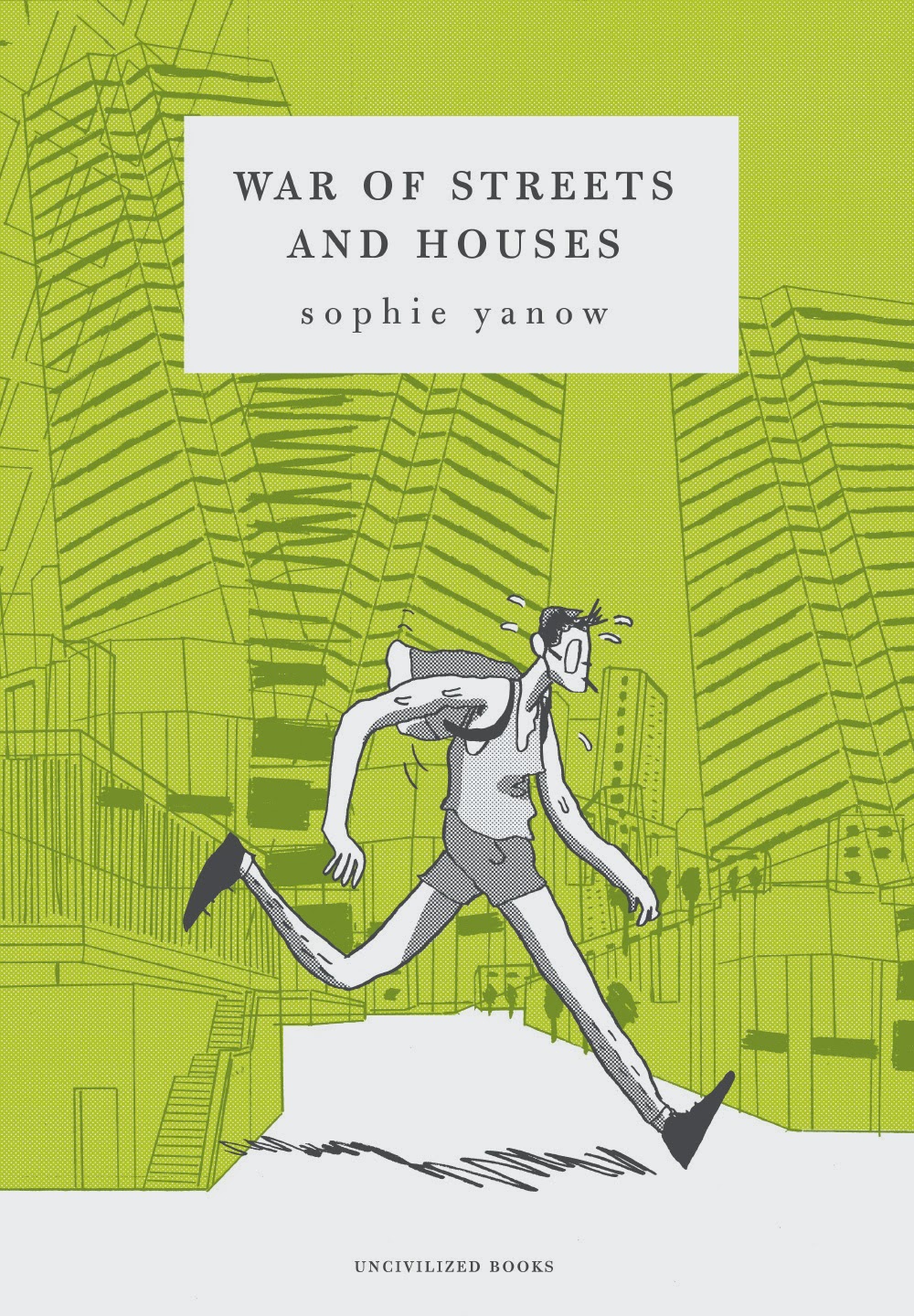 An American artist witnesses the Quebec spring 2012 student strike on the streets of Montreal. The brutal police response and their violent tactics trigger an exploration of urban planning and its hidden connections to military strategies. Marshal Bugeaud’s urban warfare tactics in Algeria, Haussmann’s plan for Paris, planning and repression in the New World; theory and personal experience collide into an ambitious and poetic cartoon memoir.

I don’t usually post the blurb for books, but I don’t think I can describe what this book is any more concisely than that. I was both excited and a little bit intimidated to pick this one up. I love a lesbian political book, and I have a soft spot for queer graphic novels, so this promised to be a good read, but it also seemed very… smart. And it is a little bit academic for a comic memoir: there are even endnotes that cite sources! These ideas are presented pretty accessibly, though. War of Streets and Houses is a series of vignettes, not a continuous narrative. Some focus on Yanow’s witness of and participation in the Quebec student protests, while others ruminate on the nature of the city and how it can affect what social change is possible.

The art style is usually loose and undetailed, but it varies. Some pages show the city as an overwhelming force in the background. One of my favourite sections of the book describes Yanow’s adjustment to living in the city by erasing this background, showing Yanow as a small silhouette against the expanse of white. Some of these drawings show more of her own internal landscape than the physical architecture, which is an interesting contrast, because a lot of the book does focus on the physical layout of the city.

Yanow briefly touches on lots of ideas that are really fascinating, mostly around urban planning and control. She shows the link that urban planning has to military tactics and now police enforcement, and how wide, modernist spaces are also conducive to controlling the masses, while winding, narrow streets can help protect resistance. She also talks about feeling an inevitable draw towards the city because she is queer, because the city is supposed to be a place where being queer is a realistic possibility. We also see glimpses of Yanow’s queer community, and a small acknowledgment of how Yanow’s whiteness factors into her activism and feeling of safety.

This is a very short read, only a 64-page graphic novel, but it will leave you thinking. If the blurb sounds at all appealing, you should give War of Streets and Houses a try.