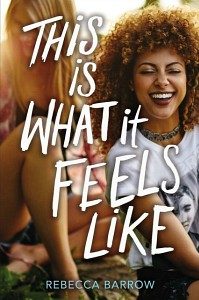 I’m grateful that we are finally starting to get YA (New Adult?) books like this. Queer YA in the last few years has really grown, including having more queer people of colour represented (although there is still much more needed). This Is What It Feels Like is so different from the kind of queer YA that was coming out just 5 or so years ago. It follows three teenage girls who have just graduated from high school. A few years ago, they were inseparable, and they played in a band together. Then, Hanna’s alcoholism landed her in the hospital with alcohol poisoning. Meanwhile, Dia’s boyfriend, who she was just starting to get close with, was killed in a car accident. Weeks after the funeral, Dia finds out she’s pregnant and decides to keep the baby. Hanna and Dia walk away from each other, and Jules sides with Dia. Now, their city is holding a music competition that includes a $15,000 prize, and they just might have a chance to win it–but it means getting the band back together.

Who doesn’t love a “getting the band back together” book, especially when it’s literal? Dia, Jules, and Hanna are all complex people, and the conflicts they have with each other are nuanced and understandable. Dia told Hanna that she couldn’t be around her baby because she couldn’t be trusted–but the real reason they drifted apart was because Dia was terrified to lose anyone else after Elliot died, and it’s the same reason she isn’t dating the boy she’s in love with. Hanna has been sober for over 400 days after going through rehab, but she’s lonely and feels like she can never be good enough for her parents. And Jules is caught in the middle, while she’s also trying to figure out a new relationship while carrying around the damage from her last one.

The three of them have a lot to work through, but I was relieved to see that they do talk about their problems. They air their grievances in a reasonable time frame–this isn’t one of those “Why don’t they just talk??” books where the only conflict is miscommunication. The problem is that they have a lot to work through, and it takes time, and more than just one conversation. They have to keep bumping up against these ghosts from the past and processing it again. I loved the realism of their relationships with each other, which are flawed and difficult, but also are the grounding forces in their lives.

This also has a great f/f romance (and a good m/f romance with Dia, to be fair). Jules meets her new coworker, Autumn and immediately has an all-consuming crush on her. If you’re allergic to instalove, you might not like that, but I think you’ll come around if you stick with it. Autumn has never been attracted to a girl before, so she’s working through that a little bit, but mostly they have an adorable beginning to their relationship. Unfortunately, Jules is working through her own issues: her last relationship was not great, and she’s a little too fixated on trying to have the perfect relationship with grand, romantic gestures instead of concentrating on what’s in front of her. Although they fall for each other quickly, they have to work at their relationship. (I have to share this cute line: “All she could see and feel and think was this girl and maybe she wasn’t really in love yet, but oh, maybe she was.”)

I am gratified to find a YA book with a teen mom where it isn’t the main focus of the book. My sister and my mother both had their first kids young, at 19 and 20 (which isn’t as young as Dia was). They also both went to an excellent school for pregnant teens, so that’s been something I’ve been acutely aware of since I was young. It is a very difficult and challenging thing to do, but it’s nice to see a depiction of a teen mom who is balancing raising her kid with school and being herself. Like Dia, my sister lived at home when my niece was young, and we all helped out. I liked seeing Dia able to be a young mom who still was pursuing her dreams and planning for her future.

I highly recommend this to anyone. I appreciated how layered and complex the relationships all are here, and I felt like I really got to know Hanna, Jules, and Dia. There’s also, of course, the thread of music running through, which is what they are all passionate about, so there’s another entry point into this story. Also, there’s an adorable toddler who is a fan of a dog named Waffles, so what more could you want? Of course, this whole review is for naught, because you should all be picking it up based on that gorgeous cover alone.