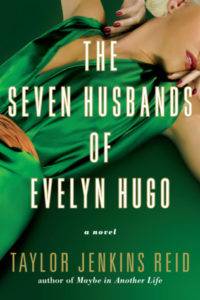 Pick this book up. (I know you might not read the whole review, so I’ll start with that conclusion.)

Evelyn Hugo was a movie star, someone with the kind of name recognition that Marilyn Monroe has now. But Evelyn Hugo is in her 80s now, well past retirement, and she’s finally ready to tell her whole story. She picks Monique Grant to write her biography, a little-known magazine reporter. No one is more surprised than Monique herself. The book alternates between Evelyn Hugo, reciting her story, and Monique’s perspective. Even as we are drawn into Evelyn’s narrative, a few questions loom: who was Evelyn Hugo’s great love of her life? Why did she pick Monique to write her story? And what has Evelyn done that is so bad that she expects Monique to find it unforgivable?

Monique is a likable character. She’s mixed race (her late father was black, her mother is white) and is struggling to make it in the reporting world. Though her father died when was a child, she still feels his absence deeply. She is disappointed in herself for having a “failed” marriage. She and her husband live apart, but there hasn’t been any closure there. They’re still married, and she is reluctant to leave their relationship in the past. Monique is drawn to Evelyn Hugo’s commanding presence, and she is inspired to take control of her own life, even while she feels conflicted about Evelyn as a person.

Evelyn Hugo, though, is the heart of the story. I know a lot of people describe her as morally gray and complicated, and as someone you don’t know how to feel about. But personally, I loved her. She starts off poor, in an abusive household, her mother has just died, and she’s desperate to get out. She will use any means necessary to achieve her dreams. And she does. She uses people, yes, but I really couldn’t blame her for it. She has very few options available to her, and she is constantly being manipulated herself. As a young actress in 1950s Hollywood, there wasn’t a lot of protection for her. So she fought back, always with an eye for how to protect herself and her loved ones.

And she does love, deeply. She makes her own family. Then, just as she begins to make it for herself as an unknown Latina woman in Hollywood (after she’d changed her name, dyed her hair, and stopped speaking Spanish), another roadblock pops up: she falls in love with a woman. Evelyn Hugo is bisexual–she’s very deliberate that Monique gets this label right–and the great love of her life is not one of her seven husbands. They have a tumultuous, heartbreaking love affair. Evelyn, especially, is worried about being outed. Both their careers would be over, and then what would she fall back on Evelyn is forced to make difficult decisions. I may not have always agreed with them, but I could always empathize with her. She did the best she could.

I highly recommend this, especially as an audiobook. I felt so much for Evelyn, and it made me really think about what it was like for queer women in the 1950s. Evelyn was privileged in many ways: rich, famous, white-passing–but she was also trapped. She couldn’t publicly acknowledge the love of her life without losing everything else she had built. The most authentic part of her was the one she felt she had to keep hidden. Obviously, this would appeal to anyone with an interest in old Hollywood, but in general, if you enjoy a good story and complex characters, give this a try.