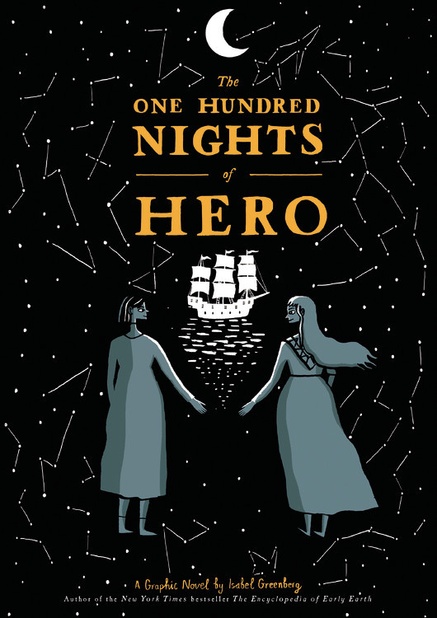 I have to start this with my Goodreads status update from 5 pages in:

I literally cannot handle how much I like this book. I can’t get through a page without cackling or exclaiming. The art! The narration! The surreal worldbuilding! The f/f couple in the middle of it!!! The feminism! The cleverness! Like, I actually can’t handle it. I have to read it a couple pages at a time or I get overwhelmed. I don’t think this has ever happened??

I don’t think I’ve ever been so giddy from the first pages of a book. I was already hooked from the premise: a graphic novel retelling of the Arabian Nights featuring a woman who has fallen in love with her maid. Once I had it in my hands, I was stunned by the cover alone. It looks even more gorgeous in person, with the text in shining gold letters. And best of all, the two women reaching for each other: no attempt to disguise the queer content.

I’m a sucker for experiments in story telling, and I love how this book is structured. From the page layouts to the narration, the design and writing of this book perfectly fits its story, even when it deviates from the norm. A book that starts with a creation story of “In the beginning there was the world / And it was weird” is going to immediately jump in my estimation. I haven’t read the previous book, The Encyclopedia of Early Earth, but this book stands on its own–while dropping enough hints that I want to pick up the earlier book to get an even richer understanding of this story.

The framing device here is that Cherry’s husband has made a bet with another man, Manfred, that he can’t seduce Cherry in 100 nights. In order to save Cherry from being forced into this arrangement, Hero (her lover and maid) tells Manfred stories over the course of these nights, with the promise that once he seduces Cherry, the stories will end. These stories are engaging in themselves, and resemble folk tales. They revolve around women, often sisters, and as those characters tell their own narratives, the nesting story structure grows.

Although there’s a timeless, folk lore feel to the story, there’s also some moments of great, clever humor thrown in, including the narrator cutting in for commentary, and Hero and Cherry using vocabulary I was not expecting! Mostly the humor is dry, feminist wit.

And, of course, there’s the romance. The unapologetic, unshakable love between Cherry and Hero. The moment that really made me trust this story was when it describes the two women getting into bed together and then cuts to after, with the narrator interjecting “No! Of course I’m not going to show what happened then! What kind of a book do you think this is?” It was setting up for a voyeuristic look into two women’s sex life, then makes a hard left and questions the reader’s expectations.

This a beautiful, epic love story that centres on two women. That fundamentally respects women and their love. This is a story that respects storytelling, that believes that stories can change the world.

This is the queer feminist mythology we deserve.