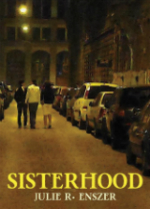 Poetry is usually pretty hit or miss for me. There are definitely poets that I am huge fans of, but I usually get impatient with more abstract, surreal poetry. So I went into reading Sisterhood with some trepidation. Luckily, I was completely wrong to be worried. This is a beautiful collection, with poems that made me stop and have to immediately re-read them, or read them out loud to my roommate, or just stop and process them for a while. I keep wanting to excerpt a part of some of these poems to give you an idea of what I mean, but the powerful lines work so well because of their context. Each poem has such economy of words that it doesn’t make sense to try to cut anything out; even the titles are often crucial to the meaning. The writing is straightforward and sparse. It explores all sorts of themes, including sisterhood in different forms, of course, but specifically the death of her sister, and how this grief has permeated her life over a decade later.

Beyond that, Sisterhood also covers queer activism, including the AIDS epidemic, her Judaism, and everyday life. There were some parts of poems that made me uncomfortable, like the poem “The Former Prime Minister”, which posits a dichotomy of Jews vs Muslims, showing only Muslims voicing antisemitism, but at the same time, it’s detailing what I assume is Enszer’s actual experience hearing this Holocaust-denying speech from “the former prime minister”. Again, these poems are so concise that it’s hard to tease them out like this. It made me uncomfortable, but then again, I think that was the point… The poem begins with the lines

I hate how these women hide themselves
beneath head scarves; for once I don’t disagree,
I sip my Diet Coke; I look at the woman
two tables away, a few strands
of hair have fallen across her face;
I want to tuck them in.

It ends with the lines,

I want to believe in some sort of transcendent,
feminist sisterhood: Donatella,  Zarina, and me.
I want to believe Zarina isn’t thinking
about the final solution for the Jews.
My throat hurts. I tie my hair back in a knot.
I board the plane. I walk away.

There’s another poem where Enszer criticizes her mother’s makeup wearing as “My Mother’s Vanity”, as well as a few poems that seem to quote hip hop just to make fun of it.

About a quarter of the way through the collection, I knew I was going to enjoy this title. It was after I read “My Father’s Pornography”, which describes Enszer finding her father’s gay porn when she was thirteen, and how this was her first introduction to the idea that there are lives unlike the ones she saw in her hometown, options she’d never considered before. After that was the poem “Zyklon B”, which was such a knock-out of a powerful poem that I needed to sit back and recover after reading it. And there are more that I can’t discuss succinctly.

Sisterhood is definitely a title I would recommend to poetry-lovers, but also to people who haven’t read a lot of poetry. If you’re at all intrigued, give it a try. You won’t regret it.

One Reply to “Danika reviews Sisterhood by Julie R. Enszer”