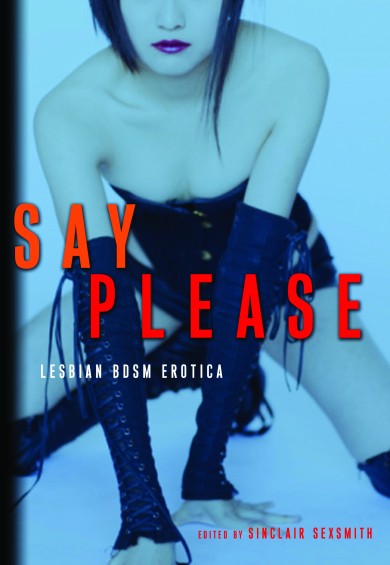 I had high hopes for this collection, and I am very happy to say that it lived up to them! In any anthology, the thing I’m most looking for is consistent quality of writing. Every collection will have some I like more and some I like less, but that should be because of personal taste, not because the writing was sub-par. Say Pleasewas obviously very carefully put together. The stories definitely show a higher standard of writing than I’m used to in erotica collections. They also show a range, from light BDSM to heavier stuff. The relationships are loving and committed, completely fleeting, or in between.

In a conversation on Lambda Literary, Sinclair Sexsmith admits that this collection is labelled “lesbian” BDSM erotica for marketing purposes and that she considers the collection queer, and that she is seeking to broaden the definition of “lesbian” for collections like this. (I can definitely empathize with this–I chafe at calling this a “lesbian book blog” and in name excluding lots of people I want to include, but I can’t find a better word.) There is definitely a lot of gender dynamics at work in Say Please. One of my favorites was “Strong” by Xan West, which features a trans butch dom and a genderqueer sub that switches between playing girl and playing boy in a scene. As Sexsmith mentioned on Autostraddle, this collection is reflective of her taste. There is a lot of strap on use in Say Please: the vast majority of stories use one. There are also a couple “Daddy” stories, as well.

One of notes I kept writing while reviewing this book was “So short!” The majority of the stories show a very small section of time. As much as I was left wanting to see more from some stories, I appreciate it overall, because many erotica stories overreach and end up losing my interest. Luckily, lots of the stories are very succinct in establishing a relationship dynamic and personalities between the people involved. “Going the Distance” by Elaine Miller was another one of my favorites because I immediately enjoyed the playful relationships that so clearly shone through in such a short space.

Probably my favorite story, however, was written by the editor herself (“Not Without Permission”). Again, the small details quickly contextualize this night in the rest of their lives.

Check out what other people have said about Say Please on their blog tour! Link are listed below.