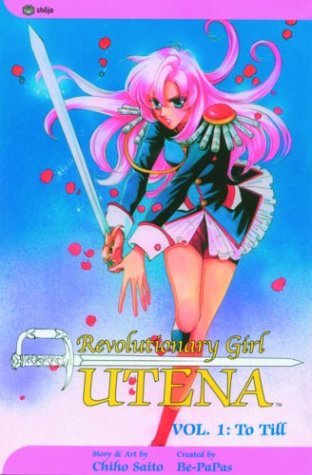 If you have never heard of Utena, I’m not sure exactly how to explain it to you. It is an anime, manga series, and movie. It’s sort of like Sailor Moon, but darker, weirder, and with more subtext and incest (between siblings). I watched the anime first, then the movie, then the stand-alone manga (The Adolescence of Utena), and now I’ve finished the original manga series. Utena follows the main character, Utena, who was rescued from near-death (or despair, depending on the version) as a child by a prince. The prince tells her to stay noble, so she is inspired to grow up to become… a prince herself! How can you resist that premise? When Utena grows up, she is told that she will meet her prince at a boarding school. There she is caught up in a bizarre dueling club and a mysterious plot surrounding someone named “World’s End” and the power to revolutionize the world. Also there’s an upside-down floating castle in the sky when they duel. Utena fluctuates between realism, fantasy, and comedy (that’s mostly in the anime). 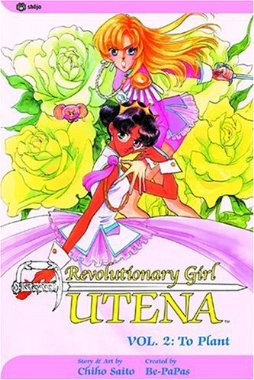 Caught up in this duelling club is Anthy Himemiya, the Rose Bride (the other girl on the cover of volumes 2 and 5). The Rose Bride is given to the victor of a duel, and she must do anything the victor says. Utena is appalled by this, and tries to win the duel to keep Anthy safe and befriend her. Their relationship is most important one in the book, though the other members of the duelling club, and Anthy’s brother, are also significant. I do think the treatment of Anthy as a woman of color in this series is very problematic, because she is treated as weak and a servant through most of series (and she is constantly being slapped). For on, the manga describes her as “exotic-looking” in the intro. (I guess that all of the characters are people of colour, but Anthy is treated differently as a dark-skinned woman.) At the same time, Anthy does get her own character arc, and I am glad that darker-skinned characters are included, but there are definitely problems with how she is treated in the entire series.

On the lesbian content: it is mostly subtext, [spoilers for movie, highlight to read] except in the movie, where they make out [end spoilers]. The manga is subtextual, though, to see the kind of subtext we’re talking about, here are my notes about it concerning the first volume: “Just subtext for now. Well, I mean, between Anthy and Utena. They’re just, you know, engaged. And Utena’s best friend constantly says that she’s in love with Utena, only has eyes for her, etc. And all the girls in school swoon for Utena, whether she’s wearing a boy’s uniform or a fancy dress.” The subtext also gets more and more intense between Utena and Anthy throughout the series. There is a character who is a lesbian in the anime and straight in the manga, however. 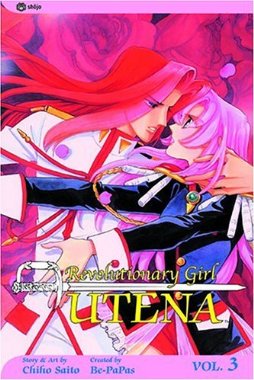 Utena is a series that is re-told through each medium, almost like how a fairy tale can be told many different ways. The manga, the stand-alone manga, the movie, and the series all cover the same time period and the same very loose plot, but they differ wildly. (I have theories about this. If you do read or watch Utena, you will probably develop your own. It is not a straight-forward kind of story.) I see them happening in the order manga series, anime, movie, and then stand-alone manga (but that relates to theories). Whether or not you plan to read the manga, I would definitely recommend watching the anime. The art (in the manga and anime) is beautiful, and the relationship between Utena and Anthy is sweet as well as intense.

For anyone who has watched the anime, but hasn’t read the manga, I would recommend picking them up. They do diverge quite a bit. For instance, the character of Nanami doesn’t really exist, Juri has a different backstory, Chuchu gets a story from his perspective, Miki’s sister’s relationship with Miki is more like Nanami’s relationship with her brother in the anime, and the conclusion is entirely different. Also, really, the art is really beautiful to look at. Oh, and there is a backstory for Utena, but I wasn’t so interested in that. 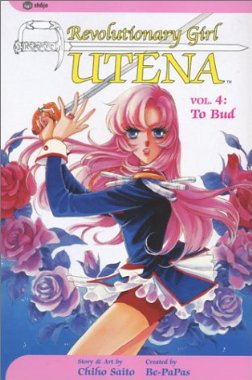 The first volume of the manga pretty much just sets up the premise of the story, and then it builds from there. I was getting worried at the fourth volume about how it would wrap up, because one of the intros mentioned that Utena had to learn to be a princess instead of a prince (but that’s the opposite of what Utena is all about!), but the conclusion was incredible. It’s so intense, and the subtext gets up to Xena levels, and I loved how Utena and Anthy’s character arcs finished (especially Anthy’s final scene). As a warning, more than half of this volume is extra stories that take place earlier in the main storyline, so don’t get confused like I did. I think that overall the manga is more straight-forward than the anime and movie. (Also, not as much incest as the anime.) I only really think that I would have to re-read the manga once to get how it fits together (though I’d probably like to more than that), whereas I still feel like I need to re-watch the anime and movie at least half a dozen times before really getting it.

I hope I have convinced you to pick up Utena, whether in book or anime format! It’s one of my favourite things. If you like/d Sailor Moon and are willing to read or watch something a little more dark and strange, you should give Utena a try. I really do get a sort of fairy-tale vibe from this series as well, so if you like fairy tales with significant lesbian subtext, you should also check this one out. If you have tried Utena, let me know what you thought! 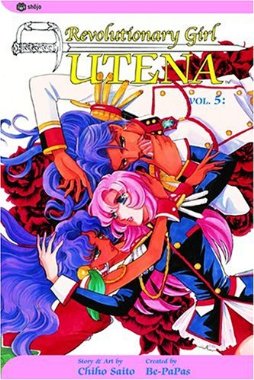