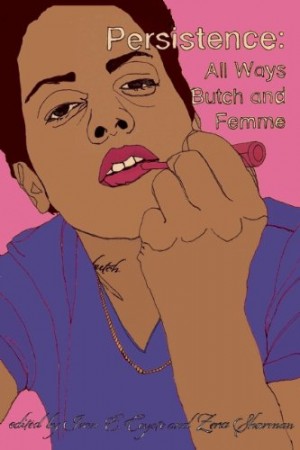 I’ve been a fan of Ivan Coyote for years, so I had high expectations for this collection. It absolutely delivered.

It’s hard to sum up Persistence other than using its own subtitle. It contains a huge array of different kind of butches and femmes (and a futch, and some switches, and…), embodied by many different genders and sexualities.

The writing it top-notch, and there are a lot of big names:  Ivan Coyote, Jewelle Gomez, S. Bear Bergman, Joan Nestle, Sinclair Sexsmith… The content ranges from academic essays to poem and short stories. Some are incredibly personal, and some are political declarations. I really appreciated the amount of essays that approached how race intersects with butch/femme, and a few that also address class.

If I could guarantee one thing, it’s that at least one entry in this collection will piss you off. There are opinions all over the spectrum in this collection, and there is a lot to be debated. For example: do butch and femme constitute each other, or can you be a butch without a femme and vice versa? Are femmes more privileged by having “passing privilege”, or are they invisibilized, or are people just not looking hard enough for femmes? Is the concept of “butch” too tied to whiteness to be used in an antiracist way? Can other sexualities and genders by butch or femme, or only lesbians? Where do butch and femme fit into the trans spectrum, or vice versa, or are they unconnected? It is the trans questions that are particularly divisive. But I think this range is the strength of the collection: it is a good attempt to encapsulate a broad-ranging community that is entirely in flux. And the voices are strong, so even the essays that were actively angering me were still compelling.

I definitely recommend Persistence, even (especially?) if you’re not butch or femme or know very little about butch and femme. It is an important part of the queer community as a whole today, and lesbian history as well. There are quite a few contributors that I will now be seeking out in a longer format.