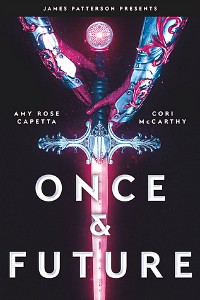 That’s what resistance looks like, Merlin. It’s not one glorious, shining victory. It’s a torch you keep burning, no matter what.

I’m not even sure how to approach writing about this book, because it is so ambitious. Once & Future is a queer, sci fi retelling of the Arthur myth, with a female Arthur. It’s somehow simultaneously dystopian, sci fi, and fantasy. Dystopia, because in this future, the universe is ruled by the Mercer Corporation, which keeps everyone in line by controlling the supply of water. But there’s enough space ships to scratch that sci fi itch, and, of course, there’s Excalibur, Merlin, Morgana, and the Lady in the Lake to keep things fantastical.

That’s partly why it’s so delightful that this also has an almost entirely queer cast. (With several poc characters as well, but this isn’t as clearly defined, so I’m pretty sure Ari is Ketch (Arab) and Lam is Black, but I’m not sure about all the other characters.) Ari and her adoptive brother have two moms. Merlin is gay. Ari, Val, and Gwen are all queer, there’s an asexual character, and there’s a non-binary character who uses they/them pronouns. There is no explanation, no reason why everyone happens to be queer, except that in the future, they aren’t so weird about it. (When Merlin says that in his time, people use phenotypical features to guess people’s gender, the other characters are disgusted by this backwards belief.) It’s nice that we’re finally reaching the point where you can have a genre book packed full of queer characters, and to have it be entirely incidental to the plot.

Speaking of plot, I have no idea how to try to summarize it succinctly. Post global warming, humans retired Earth and sought new homes on the moon and on different planets. Ari was born on Ketch, but she was found as a small child in wreckage near the planet. Ketch, originally founded by Arab people, has since been sealed off under a barrier for their resistance against Mercer. Kay and his two moms adopt illegal refugee Ari and start running from the law. When they attempt to return her to Ketch, Mom and Captain Mom (!!!) are arrested, and Kay and Ari are left to fend for themselves–until Merlin shows up to tell Ari that she’s the latest (and first female) reincarnation of the legendary King Arthur, destined to bring down evil (Mercer), ascend the nearest throne, and unite humanity. (Ari is skeptical. Merlin thinks that this usually is easier: “Most boys secretly believed they should be heroes: the stories told them so.”) And that about brings us up to the first couple chapters.

The story is shared between Merlin and Ari. Ari is a reluctant hero, just trying to protect her family and friends and do the right thing. Merlin has been training dozens of incarnations of Arthur throughout time, all without fulfilling their destiny of uniting humanity. Every time, he has to watch Arthur die. He then sleeps in a cave until the next incarnation is ready to begin training. Not only is he stuck in this cycle, tormented by Morgana, but he’s also aging backwards throughout it. Now, he’s a teenager, and he’s terrified of what happens when he becomes a child, then an infant.

One of the things that Merlin is seeking to avoid this cycle is Gweneviere and Arthur’s doomed romance. Gwen and Ari are no exception: they’ve been at each other’s throat since childhood at Knights Camp on Gwen’s medieval-themed planet. Of course, that animosity may have just been hiding something else… Unfortunately, Arthurs are destined to have their hearts broken by their Gwenevieres, betrayed by the knight they trust the most: Lancelot. Ari and Gwen’s relationship is just as passionate and thorny as their star-crossed history would suggest.

And no matter what, Ari wasn’t going to be able to walk away from Gwen. She would stay right here, in the riot of her pain, for even a chance at this closeness.

There is also a moment near the end of the book that reminded me of this take on the “ultimate female power fantasy” of The Last Jedi, so that was pretty great.

In fact, if it hasn’t already been clear, I loved this book. It is epic and feminist and queer. It’s about resistance and survival, making connections and refusing to back down. It’s being bravely vulnerable. I loved that I got to know this whole ridiculous crew, who all add to the story. They become a family, in their stubborn, arguing, loyal way. It’s fast-paced, captivating, funny, and feminist. Despite the action and comedy, it’s also deeply emotional, and has moving f/f and m/m romances. When I first added this to Goodreads, I was a little disappointed to see that it’s the first in the series, because I worried that it wouldn’t have a neat conclusion, and I would have to wait for a long time to get the sequel. Now, I’m grateful, because I’m not ready to leave this family behind, and I definitely didn’t predict that ending. (Though I was right about one thing: I am impatient to read the sequel!)

And you were the thing Mercer feared most. A girl they couldn’t control, who wouldn’t stop talking. That’s the scariest damn thing in the universe.

[Content warning/spoiler, highlight to read: I do want to read a review by a Middle Eastern reviewer, because Ketch is described as a planet founded by Arabs, who lead the resistance. Unfortunately, they were all killed by the Mercer corporation. Although there is diversity in the crew, I didn’t feel good about all the Ketch people being killed other than Ari…]