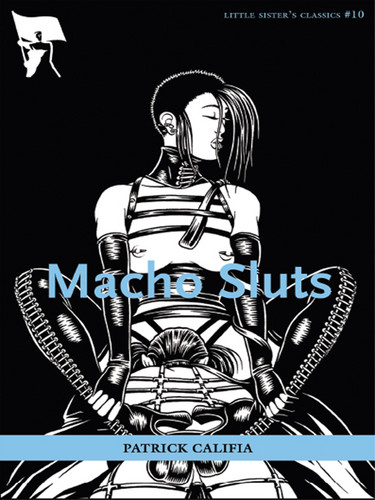 Its role making lesbian BDSM visible is important enough, but it became even more pivotal when the book was imported into Canada. Little Sister’s Bookstore, a gay and lesbian bookstore still in business today, kept ordering the book and kept having it stopped at the border for being obscene. This meant that any shipment with Macho Sluts in it was delayed or even destroyed. But the thing that makes it interesting is that Little Sister’s kept defending Macho Sluts by saying it had literary value. And after long arguments with Customs, they had to agree and release the shipment–if it hadn’t been destroyed. Except that every time Little Sister’s tried to get the book again, it was stopped at the border again, and they had to go through the same argument. They couldn’t just refer to their last decision; they had to start all over. Meanwhile, non-queer bookstores that ordered Macho Sluts would be able to get the book just fine. Other books were given the same treatment. (If you’ve ever seen the movie Better Than Chocolate, Ten Percent Books is based on Little Sister’s.) Little Sister’s took Customs to court for discrimination, and it went all the way to the Supreme Court of Canada. Little Sister’s won. It was a landmark decision and has a big place in queer history, especially Canadian queer history. Macho Sluts played a big role because it showed that porn could be literary, and that complicated things. It’s not a big surprise that Little Sister’s decided to republish it as a Little Sister’s classic with that background.

As well as explaining the historical relevance (and the author’s transition from initially publishing Macho Sluts as Pat Califia, now Patrick Califia), the introductions also stress two major points about the book: 1) it is well-written and 2) it is probably too intense for you and it’s okay if you need to put it down and not read any further. After 75 pages of this, it gives the actual stories a lot to live up to. On the first point, I can definitely see that the stories are well-written, especially by porn standards. Characters have personalities and outside lives. Sentences flow well. Califia says in his introduction how important good writing and editing is to him, and because this was stressed so much in the introductions, I was a little disappointed to find a few typos. That’s a pretty minor quibble, though.