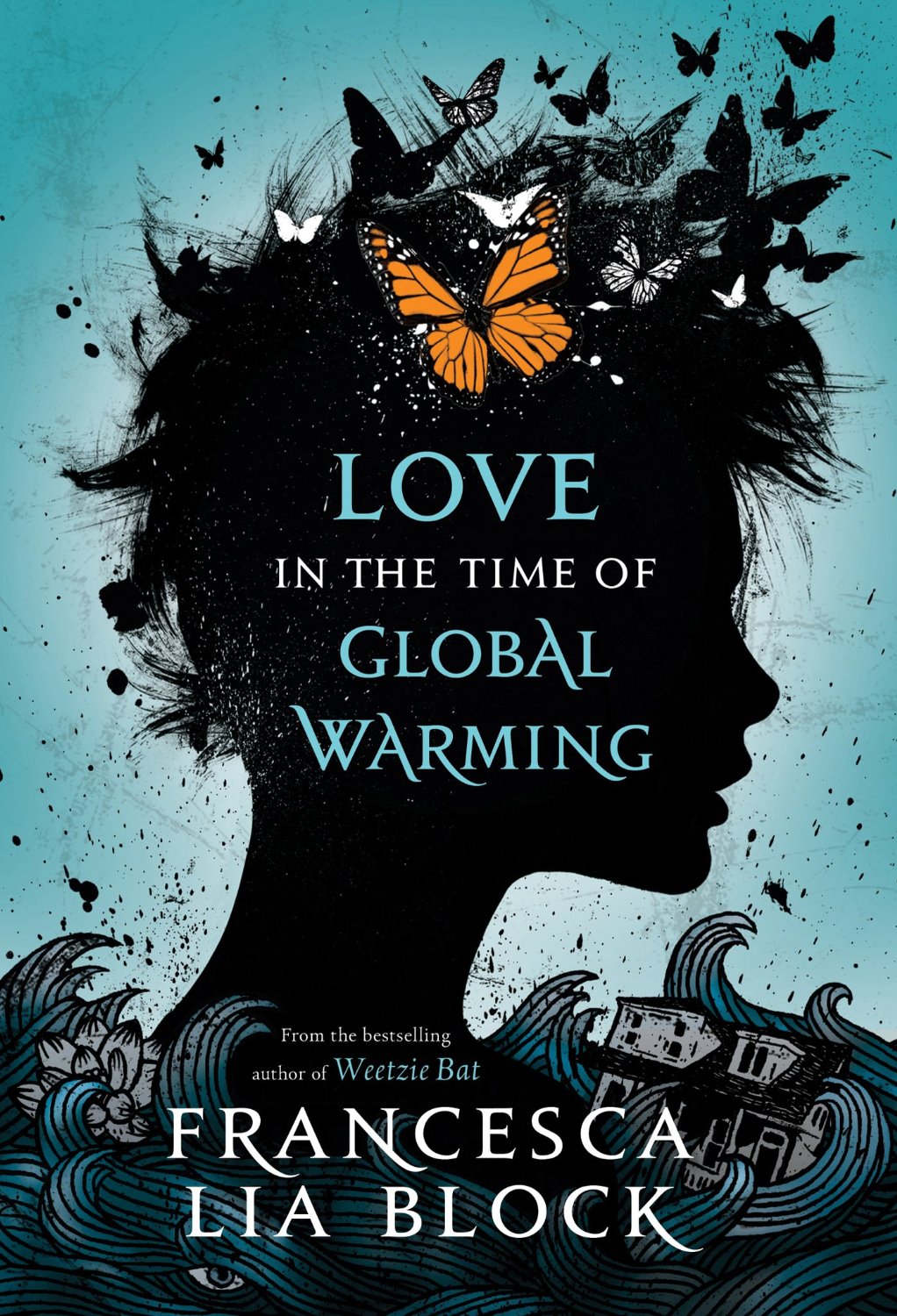 Love In the Time of Global Warming by Francesca Lia Block is a post-apocalyptic Fantasy teen re-telling of The Odyssey. Yes, it has a lot going on.

The book is set decades in the future, but for the most part it seems like it could be current day. The main character, Penelope, has survived (so far) the aftermath of the earthquakes and floods, not to mention the giants, that have decimated the vast majority of the world’s living things. After months of waiting in her paranoid father’s stockpiled house, she decides to head out to try to find her family, and her journey seems to be eerily echoed by the story of The Odyssey.

This is the first book of Block’s that I’ve read, and I also haven’t read The Odyssey, so I was a little worried that I’d be in over my head. To some extent, this book reminds me of The End by Nora Olsen. Both are teen post-apocalyptic books that also have Fantasy elements, but overall I think that Love In the Time of Global Warming pulled it off a little better. The writing was very easy to read, and I just kept being pulled along by the story–I finished it in a couple of sittings. I was so enthralled that it seemed to make up for faults that would have irritated me in other books. For example, Pen falls in love pretty quickly (this is a bisexual book, by the way, and the main romantic relationship is between Pen and a guy), but this is the end of the world! It happens. And many of the Fantasy/Sci-Fi elements aren’t really explained. Okay, so the giants were genetically engineered… but there doesn’t seem to be a good enough reason for that. And the elements of magic and people seeming to have powers aren’t explained at all. And, most of all, why does The Odyssey keep predicting what will happen next in their lives? (A note on that: don’t be intimidated if you haven’t read The Odyssey, because the allusions are pretty blatant. The book is actually quoted several times, and characters clearly state that ‘Hey, this is just like what happens in the book!’ That was a minor irritation, but I guess she didn’t trust that teen readers would get the reference. Still, I haven’t read it, and even I got those references through popular culture.) Those elements aren’t really explained at all. And the explanations that do take place, like why giants were created, or that giants caused the earthquakes (?) seemed a little flimsy. And yet! I didn’t really care. I was swept up in the story, and liked the characters too much to fuss about those things.

The characters are fantastic. Not to give too much away, but Pen does bump into other people along the way, and I thought that they seemed realistic and likeable, even though they didn’t have a lot of time to develop. [Spoilers, highlight to read] Hex, her love interest, is trans, and for the most part I thought this was handled well. Pen, who as far as we know has previously only been attracted to girls, is too busy dealing with survival to worry about now being attracted to a guy. And when she’s told, she says at some point, and I quote “I don’t give a fuck”. Which I liked. There was only one moment where she mentally considers calling Hex “her” that I didn’t like, but that was it. [end spoilers] Ah, that’s another parallel to The End: it’s a group of queer teens who seem to survive the end of the world, because queers are naturally magic, as one character in Love In the Time of Global Warming recognizes: “Maybe we have superpowers . . . I mean, besides the basic natural queer superpower”.

Right now Amazon is offering the first five chapters for free, so I definitely recommend you read a chapter or two. If you like the style, you’ll probably like the book! As long as you’re okay with leaving a fair amount of questions unanswered.