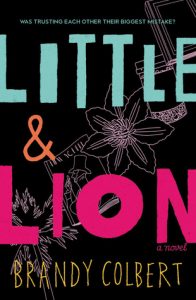 Little & Lion by Brandy Colbert is a quiet, thoughtful book that deftly handles complex subjects. It immediately reminded me of Radio Silence, another YA novel that explores race, sexuality, mental health, and adolescence seamlessly. I’m grateful that we now live in a time where queer young adult books have really matured, so to speak. In the days of Annie On My Mind, just being a white teen coming out as gay was scandalous enough, nevermind having anything else going on in your life.

Now, we finally have books that even when addressing the coming out arc can have more complexity and layers. Suzette is black, bisexual, and Jewish, and those aspects of her identity all interact and affect her everyday life. I liked how it addressed the challenges of coming out even in a fairly positive environment: the embarrassment in having to announce this intimate part of yourself, the tension in seeing what people’s reactions will be, the irritation of having it involuntarily become your defining feature, the general awkwardness.

But this story isn’t about Suzette’s sexual identity. It’s about her relationship with her brother, and how they’ve recently grown apart, to her dismay. Lionel has recently been diagnosed as bipolar, and shortly after that, Suzette was sent away to boarding school. They haven’t seen each other a lot, and they aren’t sure how to go back to the closeness they once shared. It’s painful. And it only gets more complicated when they both fall for the same girl.

The blurbs for this title seem to suggest that Suzette and her brother are pitted against each other, competing for the same girl. That’s not accurate. The core of this story is Suzette and Lionel’s relationship, and Suzette wouldn’t endanger that for a crush. So there is a love triangle, but it’s not as dramatic as that would suggest.

I really enjoyed Little & Lion. It has a lot of subtle aspects that make the reading experience richer, including microaggressions (whether that’s racism, ableism, biphobia, or antisemitism). For example, I loved when Suzette got frustrated at the double-standard that bi people are not able to have a crush on two people, especially of different genders, at the same time, for fear of being associated with anti-bi stereotypes. I rolled my eyes at a review on Goodreads which played into this and accused Suzette of “emotional cheating,” despite her not even being in an official relationship.

I can’t comment on the mental health representation here, because I don’t have significant knowledge of bipolar disorder, but overall I thought this was a beautiful book, and makes me feel optimistic about the of queer lit, and specifically bi & lesbian young adult books, to know that these sorts of stories are being published. It’s about time!