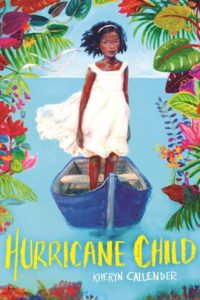 Hurricane Girl is unlike anything I’ve read before. I have been basking in this new wave of queer middle grade books, because that used to be unheard of. Now, it’s become its own little subgenre (though obviously we could use a lot more!) This book comes from a completely different angle than George or Star-Crossed or Drum Roll, Please do, however. The queer middle grade I’ve read up to this point has been pretty light. They’ve been reassuring in their depiction of queer life: there may be some pushback, but overall being queer is safe and accepted in these narratives. Hurricane Child is not light or gentle, and it’s not afraid to complex–even overwhelming.

Caroline is twelve years old, and one year and three months ago, her mother left her and her father. Caroline desperately wants to reunite with her, but she doesn’t know where she is. It doesn’t help that she is constantly harassed at school, both by her peers and her teacher. Until a new girl shows up who seems to offer up a new world of possibilities.

This story takes place on Water Island in the Caribbean. While Caroline is first realizing that she’s having romantic feelings for a girl, the only reference point she has is two white lesbian tourists she sees in a shop. Kalinda–her crush–quickly renounces them (within earshot) as disgusting and sinful. Hatred of queer people is visible in this narrative. But there’s more going on here than just Caroline’s missing mother and her feelings for a girl. She also sees spirits, which means she sometimes sees and speaks to people whom I wasn’t sure were physically present. Her dad is hiding his own secrets. And her mother’s storyline concludes in a messy, unexpected place.

There are a lot balls in the air here, and I wasn’t completely sure how I felt by the conclusion. It feels realistic and difficult, but also has a dreamlike element. This isn’t a book I would necessarily give so readily to a young queer kid, because it does contain multiple scenes of hatred of queer people, but I also think this would be the perfect book for the right kid. I’m glad it exists, and I’m excited to see how this little subgenre grows in the years to come.