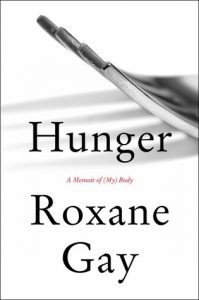 Hunger, as the subtitle states, a memoir of a body. It follows Roxane Gay’s journey with her body, from when she was a kid to her present day, and how the trauma in her life has played out over her body. This is dark, sometimes brutal book. It talks frankly about her rape as a child and how she has lived with that experience for the rest of her life. It talks about the way our society views fat bodies, how that fatphobia affects her in so many ways. It talks about her disordered eating, the unhealthy relationships she’s had (as well as the healthy ones). The subject matter is intense.

Despite this, I ended up finishing Hunger much more quickly than I had anticipated. Gay writes in an approachable, casual style most of the time, as if she’s having a conversation with you. The chapters are very short–often just a few pages. And her writing is so compelling. Whether she’s talking about fat acceptance as a movement or discussing her dating life, I was completely pulled in.

She includes a lot of nuanced, complicated looks at subjects she returned to repeatedly. Often, she’d write “I don’t know why ___. Or I do.” (“I don’t know how I let it get this bad. Or I do.”) Because that’s how we look at our own lives. It seems completely random, out of our control–or it’s a concrete narrative, every step leading inexorably to the next. We don’t know why we do things (but we do). She talks about how she appreciates fat activism, body positivity, and the health at every size movement, but that doesn’t stop her from wanting to lose weight–that even the representation of fat bodies in these movements don’t represent people at her size and the struggles that she has with her body.

I love Roxane Gay’s writing even when I’m disagreeing with her, and I felt like Hunger was the strongest work I’ve read by her. I have enjoyed every book I’ve read by her, but I really felt affected by this one. It’s definitely not as big a focus as some of the other themes going on, but there is queer content in Hunger. Roxane Gay is bisexual, and she talks about her coming out as well as some of her relationships with women.

I rated this 5 stars, and it’s one of my favourite books I’ve read this year. I’d definitely recommend it, as long as you are prepared for the discussion of rape, disordered eating, and negative body image.

2 Replies to “Danika reviews Hunger: A Memoir of (My) Body by Roxane Gay”