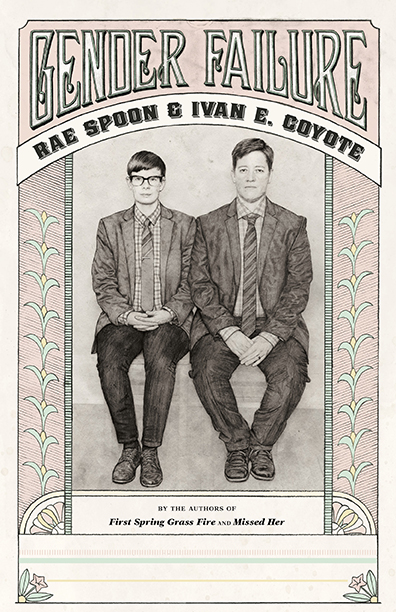 Ivan Coyote is one of my favourite authors, and this is actually the ninth book edited or written by them that I’ve read. Rae Spoon was already one my most listened to musicians before their first book, First Spring Grass Fire blew me away. So it’s no great surprise that I loved this book. I was actually lucky enough to attend one of their shows during the Gender Failure tour. Both Ivan and Rae are fantastic performers, and they played off each other really well. It made me even more eager to pick up the book.

The performance and the book obviously have a lot in common. I liked that Gender Failure attempts to recreate some of the visual aspects, including lots of black-and-white photos, illustrations, and even hand-written lyrics. Many of the stories included were performed during the show, but there are still lots more that weren’t, so it’s definitely worth the read even if you were able to see the performance. I was surprised to see that the first essay included in the collection was the story that I found the most powerful and painful of the show.

Both Rae and Ivan are extremely talented storytellers. Ivan writes very much like they speak, and it feels like someone you know is sitting across the table from you, filling you in on their life since they talked to you last. It’s casual, but very personal, giving the stories a vulnerability that makes the emotional punches even stronger. Ivan and Rae explore different aspects of being a “gender failure”, from their childhoods to their everyday lives now. I especially appreciated Rae’s contrasting of performing as a country singer in both small-town prairie bars and big-city queer clubs, and pointing out that they weren’t more likely to get called the correct pronoun in either place.

I found myself tearing up while reading Gender Failure more than once. It’s emotional, but there’s also a lot to think about here. Rae and Ivan bring up some powerful questions, and examine gender in different ways and contexts. I appreciated that though this is a collection of personal essays by two AFAB “gender failures”, Ivan includes several essays that focus on a trans woman friend of theirs, and the transmisogyny that is different from Ivan’s own experiences with being a “gender failure”. This is an accessible book, even if you haven’t read a lot of trans narratives, but it also has a lot to offer if you’re more familiar. This is a book I would hand to almost anyone, whether it’s to broaden someone’s mind or offer comfort in knowing that you’re not alone.

As a side note, this isn’t a lesbian book, to be clear. I started the Lesbrary to have a queer book blog that wasn’t focused on men, so I’m happy to showcase nonbinary authors as well.